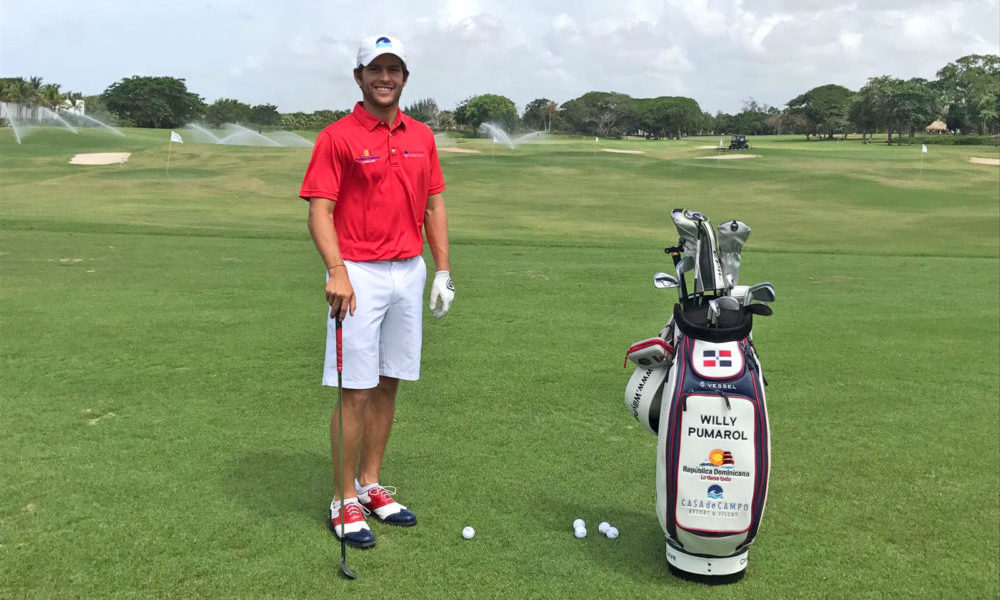 Casa de Campo’s Golf Ambassador and the official representative of the Ministry of Tourism for golf in the Dominican Republic, Willy Pumarol recently returned to Casa de Campo from the Puerto Plata DR Open 2017 which ended on Sunday, June 11th. Casa de Campo Living caught up with the young athlete who placed the country in the World Golf Ranking after becoming the first Dominican to win the PGA Tour Latin American card. Over a hearty egg-white and spinach omelet, with mangú of course, at Lago Restaurant, Willy chatted about golf in the DR before he headed out on the Teeth of the Dog.

I feel that it happened to be my time. I’m not thinking I want to be the first; I just want to be a really good golf player and inspire others to play. Already there are many juniors who are playing very well like Juan Cayro Delgado and Juan José Guerra who were with me in the Puerto Plata DR Open. My goal is to get to PGA Tour USA and win there.

When did you start playing golf?

I started when I was three years old with plastic clubs. My dad taught me to play; he plays a lot and my grandfather played until he passed away. My uncle does as well, so I guess it’s in the blood.

How many hours do you practice per day?

The whole day. Today we started at 7:00a.m. and were hitting balls; then, I have breakfast, practice, lunch, and more practice. Afterwards, I go to the gym and then I’m dead. The driving range here in Casa de Campo is grass so it’s perfect; I can hit 700 balls there in one day and feel good.

Watch Willy Pumarol do some tricks on the Teeth of the Dog Driving Range. It’s not all work and no play:

How long does it take for you to play a round on the Teeth of the Dog?

If I’m by myself, I can play in two hours, but if I want to stay and work I can be there for six.

What’s your favorite hole on the Teeth of the Dog and how does the course compare to others?

My favorite hole is #5. It’s gorgeous. It’s a short par 3 right next to the ocean. The Teeth of the Dog is tough, especially in the afternoon because it’s windy. There are seven holes by the water which can be very difficult because of the unpredictability of the wind. The course is incomparable to anywhere else, even Pete Dye said God created the seven holes right next to the ocean. He just saw it.

Which holes are most challenging for you and how do you work through them?

Hole #2 is a simple par 4 but into the wind it’s difficult because you’ve got a waste bunker left with rocks and trees to the right. The tee shot is challenging; you have to hit low. If the ball stays below the wind it flies better. On Hole #4, new tees were added a couple of years ago that make the hole much longer, plus it’s against the wind as well. Then, Hole #13 is a long par 3 with a crosswind — the green is hard to hit because it’s surrounded by a waste bunker so if you miss the green it’s hard to make par. The list goes on; everything is very good practice for me, for anyone really.

Besides golf what sports do you like to play?

I love tennis; I watch it a lot. I can get to most any ball because of my reflexes but it’s hard for me to serve. 1 out of 15 I’ll serve perfectly and others are like, ‘Where did that come from?’ My favorite is soccer, I used to play a lot growing up and even when I moved to the states at age 17 I was offered a scholarship in soccer and golf. Obviously, I wanted to play golf.

Who do you admire in golf?

Jack Nicklaus; he won 18 major championships and he finished 2nd like 19 times. That’s the highest of all time. In all the majors he played, he was in the top 3. Plus, outside of the course he has a really cool family and has been married almost 60 years. He has designed some amazing golf courses around the world, like Pete Dye, and you’ve never heard anything bad about him. I met him when I was 11 or 12 when he was designing courses in Cap Cana. He has also stayed with the same swing coach is entire career.

Do you have a swing coach?

I do; I’ve changed a bit while I’m trying new things. I’ve been with Eduardo Herrera for the last 3 years; he was the first Colombian to get to the PGA Tour, back in 2000, and I’ve always worked with Jonas Fernández. He’s Dominican and certified in the Jim Mclean Golf School, the same as Casa de Campo’s head teaching professional, Eric Lillibridge.

I had a positive experience and made the cut; that’s one of the goals you always have when playing. I had a couple of bad days where I was trying to save par instead of make birdies but that’s just golf. I had a little crowd following me and they pump you up even when you hit a bad shot. They encourage you, ‘Come on, Willy!’ The week before I was at the Quito Open in Ecuador and hit really well.

What’s the golf scene like in the Dominican Republic?

Right now, I’m the only one traveling and playing golf professionally, and hopefully in coming years there will be more of me. One thing I think we need is a public golf academy and golf in universities. There are a lot of amateur golfers who should be given the opportunity to play more. I like the support that Casa de Campo is giving to youth with the Junior Golf Academy, and it feels great to have them as a sponsor.

In your new position as the Casa de Campo Golf Ambassador what will you be up to?

Well, I will be representing them in 30 international tournaments through the 2018 season, a little in the PGA Tour Latin America, PGA Tour Canada, European Q-School, Web.com, and others. You can check out my website that launched a couple of weeks ago to follow the schedule. Next weekend, I’ll be playing in the Casa de Campo Dueños Tournament on July 1st and then the Staal Foundation Open in Ontario. It will be my first trip to Canada— I’ve heard good things about it.

Do you have a golf tip for readers?

Well, Hole #13 on the Teeth of the Dog can be tough so I say: Hit the green because if you miss it you’re dead. Usually the wind moves left to right but the tee is surrounded by tall trees so you don’t feel it. Maybe you aim for the green but the wind moves it; so aim to the big tree on the left and trust that the wind is going to carry it right. Try to land it, just land it on the front of the green and forget about the flag. Go for a two putt. My second tip is to work on your “miss-shot.” Your good shot can be really good, but your bad shot really bad. Getting better with your miss so you can still play is crucial. I have to work on this. The better you are with your “miss” the more chances you have of making par and under.