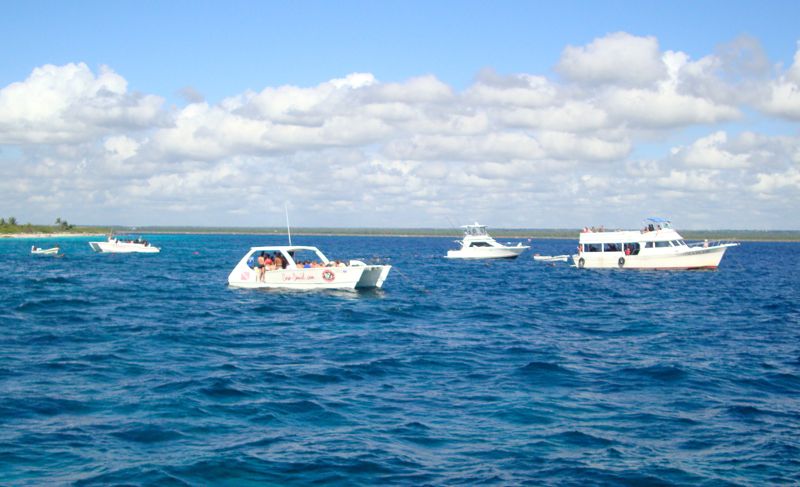 Casa de Campo is wonderful with so much to do that venturing out sometimes seems downright silly. Nevertheless, we were recently invited on a press trip to journey out and explore La Romana, Bayahibe, Dominicus and more… and quite frankly, we were quiet pleasantly surprised.

While we have long known of a few key places in Bayahibe (Mare Nostrum for example), we thought it would be fun to expand our horizons. Starting bright and early at 7am, the bus organised by the Asociacion De Hoteles La Romana Bayahibe picked up a bus load of reporters, videographers and other assorted ‘press’ to come and explore La Romana, Bayahibe and Dominicus. Luckily that bus left Santo Domingo at 7am, allowing us to meet them at the Club Casa y Pesca pier under the Charles Bludhorn bridge of La Romana.

So 9:30am sharp(ish) we arrive!  Catamaran ready, bathing suits on, sunscreen, cameras – and we’re off! We soon realise that the tour is going to be fast paced and packed with non-stop adventure, which will lead us through various meals, tastings, speeches and exciting new things to see and do.

During our trip, we also learned a TONNE of facts, figures and random information – too much to include in this single post, but we promise to keep brining you more and more posts about how to fully explore La Romana and Bayahibe!

1. Snorkelling at ‘La Pared’ (or ‘the wall’) of the coast of Isla Catalina – a breathtaking experience!
2. Snorkelling at ‘Capitan Kid’– a 1699 Shipwreck and cannon repository.
3. Cadaques, beach retreat village and fantastic boating stop
4. Los Lagos – restaurant on Dominicus beach
5. El Tracadero Beach Club – stunning high-end beach club
6. Capitan Kidd – Bayahibe’s new party bar!
7. The BeachClub by Le Cirque – arguably one of the best restaurants in the Dominican Republic and certainly one of my favourites!

As I’ve already said, reviews of each place will be coming soon, in the meantime, here are a selection of our photos taken during the adventure!