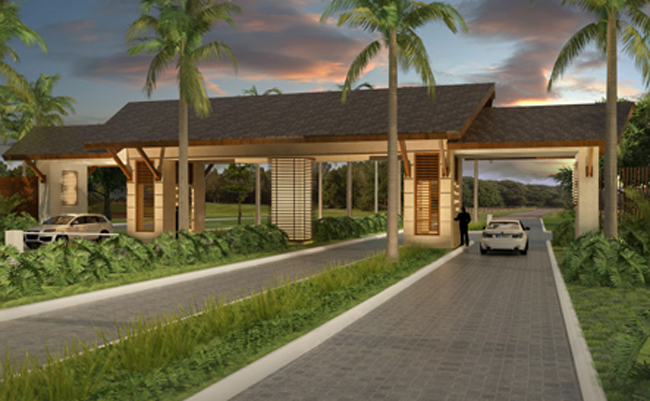 Scheduled to be completed in 2015, the new Casa de Campo entrance, otherwise being referred to as the “second main entrance”, will be located at the junction of the La Romana – Casa de Campo International Airport on the El Coral highway, and will connect to the resort at the security gate leading up to Altos de Chavón, close to the Barranca Este and Las Cañas neighborhoods. You can see where on the map below.

Map of Casa de Campo and the “second main gate”

And while we’ve known about this new entrance for quiet some time, this is the first time we get to glimpse the future – thanks to these renderings provided by Selman & Associates, the architects selected for the task of designing the new entrance.

“We feel thrilled and honored for being chosen to design such an important project for Casa de Campo, and sincerely appreciate Costasur and Central Romana’s trust in our work.” Rafael Selman of Selman & Associates told Casa de Campo Living.

As you may notice from the architectural drawings, the main entrance looks strikingly similar to the Casa de Campo hotel, which underwent a massive US$40million renovation in 2011, and was also designed by Selman & Associates Arquitectura.

“We wanted to bring the same elegant yet relaxed Caribbean atmosphere of the hotel to this new face of the resort.  The use of similar volumes, materials, textures, colors, lighting and landscape designs provide the resemblance and welcoming sensation.” Said Rafael Selman when commenting on the design for the new entrance.

Construction began on the new entrance this summer, and great progress is being made- with the entire 2km stretch of road already cleared. And so with the future bright, and coming soon… what are the key features of the new Casa de Campo entrance?

The other entrance will remain open

Costasur is also investigating ways in which to further improve the flow of traffic within the Casa de Campo resort. For example, once this new entrance is completed, the volume of traffic on the road with the fire station will experience a much higher flow of traffic – something which Costasur has taken into consideration and is already planning for.