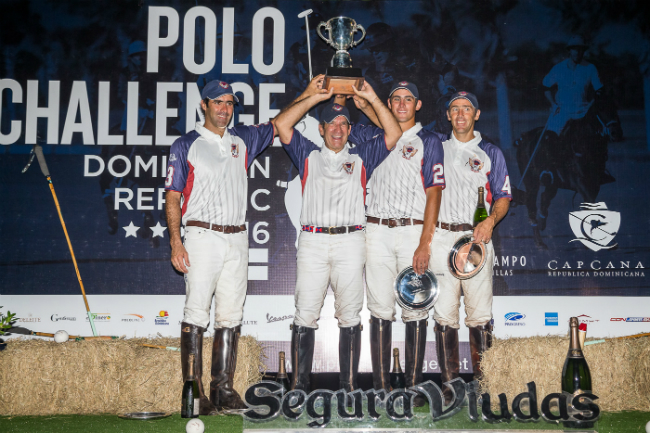 The Bronze Cup finished on Saturday, January 30th on a beautiful day in Cap Cana between finalist Agualinda and Lechuza.

It was hard to predict the champion as the two teams maintained close scores throughout. The final was the lowest scoring game in the tournament with just 6 to 5 goals, but ended with Lechuza Caracas team for the win!

In a fierce competition, two injuries paused the game. One for Jauretche when he fell off his horse in the fifth chukker and the other for Pelon who was hit in the forearm by the ball in the same chukker.

It was Victor Vargas’ goal that put his team ahead by one and awarded them the championship. Pelon Stirling of Agualinda took home the MVP award for his excellence in defense and offense throughout the game, scouring 3 of their 5 goals.

Following the game Victor Vargas, owner of the Lechuza Caracas team and one of the partners of the Polo Challenge RD, had this to say during an interview: “The game was tough…I am very happy to be here. This is some kind of dream; to be here and to do the polo challenge. My dream was to play in this area, high goal polo.” He went on to discuss the future of polo in this country, revealing Cap Cana’s interest to introduce two more polo fields, having recently finished a third. Vargas himself says two more fields are on the way at his Club Lechuza Caracas RD, and he is reaching out to Casa de Campo to convince them to also add two more!! Which will bring the total up to 15 fields throughout the country. “I enjoy it here in the Dominican Republic; this is my second home” said the happy polo champion.

We can look forward to this week’s Charity Polo Day Royal Salute on Saturday, February 6th, as well as the polo Silver Cup and Gold Cup right around the corner. More high goal polo is on its way!

See even more photos of the Bronze Cup Finals at Pololine.com!