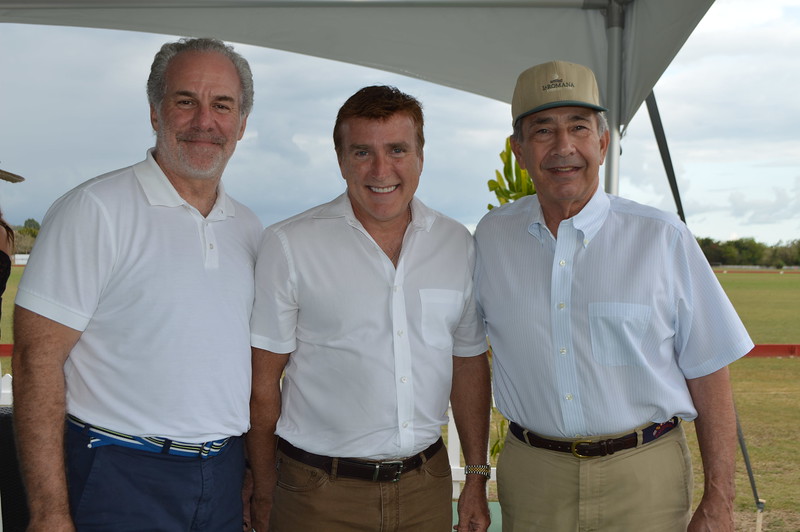 Polo matches are a sure fire way to spruce up your weekend routine, as many Casa de Campo community members and fans can attest. We’ve seen excellent, fast, and downright close matches that held us onto the edge of our seats, especially in Sunday’s game with La Carbuccia versus Cinque Terre, who is rapidly becoming a favorite to win the Gold Cup. Saturday’s Casa de Campo match against Los Samanes brought out quite the crowd, including Ambassador James (Wally) Brewster and his husband, Bob Satawake. They enjoyed chatting with friends and taking in the afternoon’s lovely day. Casa de Campo is always the place to find great sporting and outdoor activities along with delicious cuisine and unparalleled landscapes. We hope to see you at this week’s games, starting on Thursday!

Bronze and Silver Cup champion Collardin joined Pitirri against the mighty Cinque Terre. They started with a 2-goal advantage but the game quickly evened out as they faced the triple threat of James, Laprida and Novillo, spearheaded by a very alert Bazzoni at number 1, who scored one goal per chukka.

During four whole chukkas Pitirri were only able to score one goal, converted by Collardin. They made a comeback in the fourth and fifth; three of the four goals were by the newcomer. But Cinque had amassed 10 by the end of the fifth and managed a comfortable win. Final score 10 -7; MVP Alessandro Bazzoni.

Due to transportation issues, the game between La Carbuccia and Los Establos started later than expected. The teams finally managed to get into place and play two and a half chukkas before sundown. Both teams managed to rack up three goals – La Carbuccia aided by 1 goal in handicap. Toccalino and Brane both scored two while Marambio stole one from La Carbuccia just before the end of play. The game will be continued in the next few days.

The two reformed teams meet on their home ground but the result remains the same. A classical, open and clean game; Victor Vargas with the powerful Stirling/Nero combination behind him puts in 4 goals while Pelon rams home a hat trick in the second. Nero also scores one in the first and another in the last. Good performances in opposition came from Garros who also scored three goals and Benjamin Araya with two that gave Agualinda a dignified total of 5. MVP Pelon Stirling.

Casa de Campo got off to a defiant start by quickly capitalizing on their two goal handicap advantage. Three goals in the first, two from Donoso and one from Pieres put them ahead by three despite Santi Toccalino’s two early goals. However, the defense kicked in and Toccalino continued his flurry amassing 6 in total. Marcelo Frayssinet had an injury in the third chukka that really gave the game some colour as the great Milo Fernandez – Araujo stepped in on great form depite a lengthy absence from the game. A straight 3 goals in the fourth chukka and then one per chukka thereafter very quickly put CDC back in their place. Pieres and Donoso piped up with 3 goals by the former and one by the latter but all four Samanes players were hitting the mark and managed to put in 14 goals to CDC’s 9. MVP Milo Fernandez – Araujo.

A close game between two very evenly pitched teams – Cinque Terre now being almost the second favourite for the Gold Cup and the team to beat, versus La Carbuccia.

La Carbuccia started well with a one goal handicap lead and a quick goal from Brané; but Nacho Novillo-Astrada quickly leveled up with two of his own. Novillo Astrada and Donovan exchanged goals in the second half but in the third chukka Cinque Terra crept ahead with goals from Bassoni and James. James was named MVP as he went on to score once again after half time and the last goal of the game in the sixth. Brané and Donovan had each scored one at the end of the fifth to put their team within two goals of their opponents. Zorilla also managed a goal in the last but it was thanks to James’ goal that Cinque finally overcame La Carbuccia 8 goals to 7. Los Establos 10 vs Pitirri 8.

This was the first win of the tournament for Los Establos. Pitirri’s Gerardo Collardín was named MVP of the match.

Cinque Terre vs Los Samanes, 4 pm, field to be announced