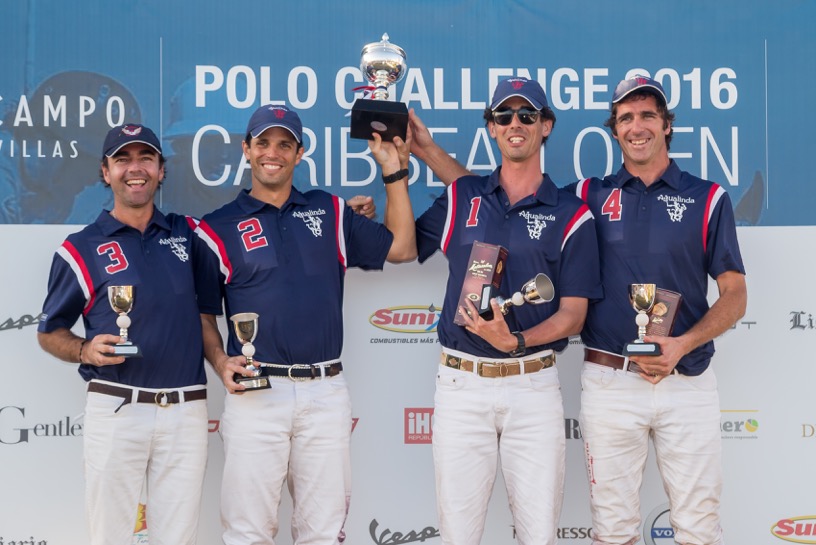 The final week of the Polo Challenge was all about the 14-goal Caribbean Open and the Azimut Cup, a series of 22-goal matches between the three best teams of the Caribbean Open: Los Establos, Lechuza and Cinque Terre.

Polo was played throughout the week and reached a high on Thursday with two 14-goal Caribbean Open games and one Azimut Cup match. The 22-goal Azimut Cup came to an end on Saturday with a big party. In the first match of the day, El Guero took a 7-5 win over La Patrona on Casa de Campo’s number three field; Zenón Zorrilla was named MVP. Next up at, also at Casa de Campo, Agualinda beat La Carmela 12-8; Marcos Araya was named MVP. Finally, it was time for Lechuza to take on Los Establos. Both teams played an exciting match, but Lechuza came out on top, winning 11-9. Polo Challenge came to an end on Saturday.

After three months of exciting polo and an incredible high-goal debut in the Dominican, undefeated Lechuza closed the season winning another title: The Azimut Cup. The day began with the final of the 14-goal Caribbean Open, where Agualinda beat El Guero by 11 goals to 6. Alfredo Vargas, who shone throughout the season, was named MVP. The subsidiary final between La Patrona and La Carmela was played next. La Patrona won the match 9-6.5; Fernando Arata won the MVP award. Finally, it was time for the big Azimut Cup final between Lechuza and Cinque Terre at Casa de Campo. While Cinque Terre were one of the strongest teams of the season, they failed to dominate powerful Lechuza, who triumphed by 8 goals to 7. The day ended with an After Polo party by Stella Artois, with music from Black Velvet.

A special thank you to Lechuza Caracas RD, Los Establos Cap Cana and Casa de Campo for hosting our tournaments and working with us over the last few months. Polo Challenge would especially like to thank the players, patrons, and media outlets who worked to make this the best season possible. And last but not least, the spectators who made the season such a joy. See you next year!