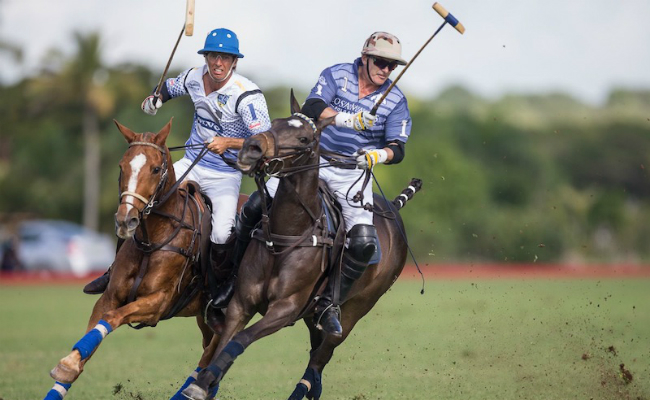 Following an afternoon of inaugural games on Thursday January 14 at Cap Cana’s Los Establos, the DR Polo Challenge’s Bronze Cup set foot for the first time on the Casa de Campo polo fields last Friday attended by a large number of spectators who eagerly awaited the formal opening of the season. The event demonstrated its high level on the court with the presence of players like Juan Martin Nero, considered the second best polo player in the world.

We had a great time on Friday and Sunday afternoon, and were able to meet up with so many friends and neighbors! We have MANY photos of everyone who attended the polo matches and are looking forward to share them with you …but there are so many that we ask you to hang in there and wait for our second article of this weekend’s polo events scheduled for tomorrow where we will be able to share them with you! Meanwhile, we will focus on giving credit to what really matters – the matches and play:

On friday, Papo Menéndez, Central Romana Corporation Executive Vice President, threw the first ball formally inaugurating the event. After which two interesting matches were held, the first one between the host team and La Carbuccia. Pancho Bensadón, started of the local team lucky streak, scoring a goal in the first 20 seconds of play, and despite the attempts of Juan José Brane of stopping the local team, the duo of Tomas Pieres and Bensadón, together with Ramiro Garros continued scoring. The final score was 11-7 Casa de Campo being the winning team (Go Team! -we are obviously biased and rooting for our home team!). Naturally, Pancho Bensadón was the MVP.

The second match was much more exciting for the audience, not only because it was played on the court 1 of Casa de Campo, opposite the big tent, but because it was the debut of Juanma Nero in Dominican Republic. The champion did not disappoint, and the chemistry with his longtime companion Victor Vargas was evident from the beginning, scoring two early goals in the first chukker and two in the second. Santi Toccalino shot back, but La Lechuza had the advantage. The game was won by La Lechuza who finished 10-7 with Juanma Nero MVP.

On Sunday, the spectators returned to the playing field at 10 in the morning to witness the first game of the day. Carlos Silva’s Los Samanes demonstrated to be a strong team and soon made their mark, especially with the very good contributions from the great Santi Toccalino, who scored nine goals. There was not a single chukker in which he did not score at least one. On the other hand, in La Carbuccia, Juan José Brané was not as required as in Friday’s game and could only score twice. The final scoreboard was 13-10 in favor of Samanes.

The last game on Sunday confirmed the potential of La Lechuza as a candidate champion of the tournament, after its victory yesterday at Casa de Campo. Victor Vargas’ team is a powerful machine with a system that is impossible to crack. The formula – while Jauretche and Toto support, Nero passes to Victor Vargas who comes from behind, and always seems to be in the right place.

While Casa de Campo scored several goals, La Lechuza dominated the match. Leo Matos was the best player of Casa de Campo, with six goals, including three in the fifth. Pancho Bensadon played brilliantly as usual, but his two goals in the last chukker could not prevent the fall by 14 to 10. It shall be next time team Casa de Campo, and we’ll be there supporting you!

Do not miss our article tomorrow with everything that happened off the playing field!

When: Play to take place throughout the month of January. The cup’s finals are scheduled for January 30th.

Consult full events calendar in the following flyer for details of match locations.