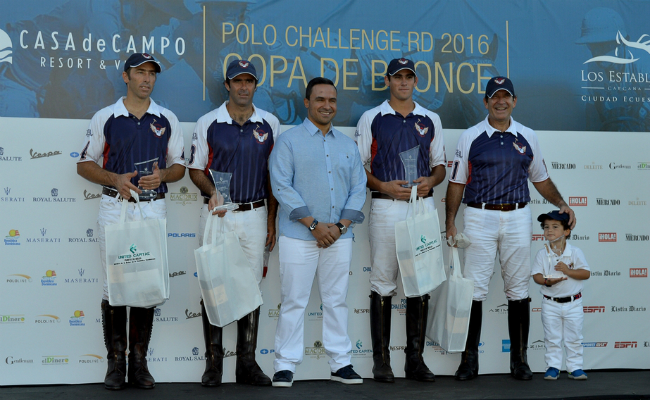 The Bronze Cup is coming to an end! The last game of the regular series for this tournament was hosted at Casa de Campo this past Saturday, the 23rd. There were very intense games; Agualinda scored 10 against La Carbuccia with 7, and Lechuza scored 12 against Los Establos’ 7. As always, it was very entertaining afternoon with the speed and beauty of polo as well as an exciting social scene, and full of kids too!

Two Argentinian teams, Agualinda and Lechuza are the most solid teams of the Bronze Cup. Lechuza’s Victor Vargos was called best player of the tournament. Argentina is on top!

This past Sunday’s games were held in Los Establos and brought victory to Pitirri Potranca with 10 points against 7 for Casa de Campo; and Power Infrastructure with 9 points against Los Samanes’ 7. Casa de Campo made several attempts to get ahead, but was unfortunately unable to do so with Tomás Pieres’ successful counter attacks. Rodrigo Rueda served incredible assistance to his winning team members’ goals and proved to be the MVP.

Lechuza, Agualinda, Los Samanes and Power Infrastructure will go on to play in the semifinal matches, TODAY at Los Establos!

Here are the team lineups below:

The games leading up to the Bronze Cup Finals have been thrilling, fast paced and aggressive – excellent polo! We expect nothing less for today and eagerly await the scores!

Here is a review of the first round of games from the Bronze Cup, the first of the four tournaments in the series courtesy of PoloLine:

Plus, we are very much looking forward to the Silver Cup kick off soon, and the BEST OF THE BEST POLO DAY NEXT SATURDAY, February 6th! The match which will feature players in the World Polo Tour, including Adolfo Cambiaso, ranked the #1 polo player in the world! It’s not every day you get to see a game with such stars. Click here to learn more about the top players with a handicap of +10 goals.

The following photos were taken this past Saturday, January 23rd at Casa de Campo of the polo match between Lechuza vs. Los Establos: