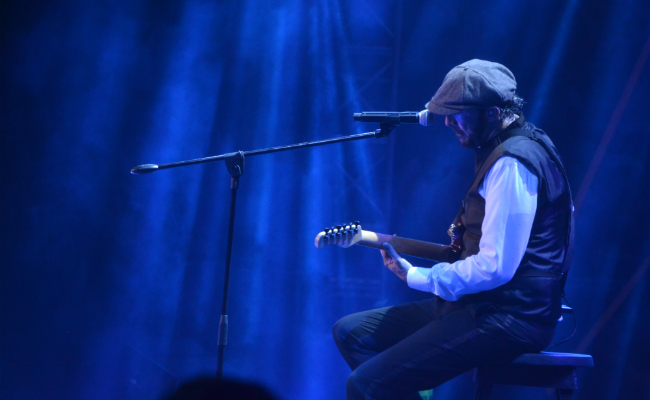 Since 2015 was a wonderful year in every sense of the word, we had to end it the right way, and without a doubt that’s what happened last Thursday, December 30th, when Juan Luis Guerra & the 4.40 brought their iconic sound to the Altos de Chavón Amphitheater.

Despite the rain, which made its appearance at several Casa de Campo events last year — the concert kept going and people didn’t move from their places as they sung along with Juan Luis to the rhythm of “Ojalá Que Llueva Café” (I Hope it Rains Coffee). Funny, right?

Much like his concert at Altos de Chavon back in June, songs like “Cookies & Cream”, “Travesía” and “La Llave de Mi Corazón”, got everyone up from their seats and dancing, even those who claim to have 2 left feet. Juan Luis, as the family guy he is, showed his affection for his wife Nora, by playing a bachata dedicated to her called “Mi Bendición” (My Blessing), which got the audience singing their lungs out, and another one for his daughter Paulina called “Muchachita Linda” (Little Pretty Girl).

Then came the moment for the band to show why it is one of the best musical groups of the country as Juan Luis got off the stage giving 4.40 the opportunity to showcase its talent, only to return to the stage accompanied by none other than Marc Anthony as a surprise guest artist. With whom he played one of his songs and accompanied him with “Tu Amor Me Hace Bien”.

There is no doubt that Juan Luis Guerra is one of the best artists of the Dominican Republic, or rather, of our time. People just don’t get tired of him and always ask for more. It was not enough with two concerts at the Altos de Chavón amphitheater, and at the end, the audience asked their deserved “ñapa” (extra), which granted us with the encore songs “A Pedir Mi Mano Viene”, “Estrellitas y Duendes” and a medley of bachatas prompting a second rain, but with fireworks instead of water this time.

Undoubtedly, this concert was one for the books. From the setup, the energetic atmosphere, the beauty of Altos de Chavón, the band, and evidently the guest artists… a great way to say farewell the wonderful 2015!

The following collection of pictures were taken by Alejandro and Mariana Heredia during the Juan Luis Guerra concert at the Altos de Chavón Amphitheater last Wednesday, December 30th: