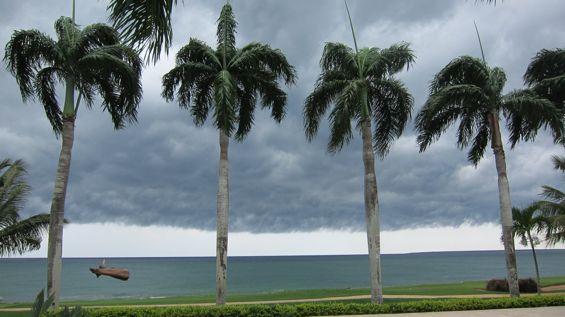 It’s official, hurricane season is here and despite June historically being the ‘warm-up’ month, when the Dominican Republic and the Caribbean normally experiences a minimal number of storms and bad weather, here in La Romana and Casa de Campo this so called ‘warm-up’ has been rather fierce to say the least!

This week’s photo, was taken last Sunday the 29th of May (3 days before the start of the dreaded ‘season’) and it’s a thunderstorm literally sweeping in from the ocean. For sometime before this photo was taken the sky was looking dark and foreboding, but very suddenly the wind started to pick up and the clouds formed into this very defined shape. Obviously not one to miss such an incredible photo opportunity I started snapping away and in a series of photos managed to capture the progress of this storm as it appeared and less than 10 minutes later roared into life with wind rain, thunder and lightning. The photo at the top is the last before the rain started – and I particularly like it because I captured (unintentionally) a large branch falling off one of the palm trees – gives you an idea of the battering strength of the wind.

I personally find the weather and particularly bad weather fascinating (a little sadistic, but I think that’s a British thing), so here I bring you a short photo illustrated narrative of the progress of this Sunday afternoon storm, which brought a little excitement to our lazy day!

Photo #2: Great excitement! Are they mini-tornadoes?

Photo #3: Narrow Escape: The branch falls where I was just standing to take the previous photos!

For the sake of the British and other weather-watching geeks out there, here are a few of the other photos I took, I obviously didn’t just take 4 – this is the age of digital cameras don’t you know!

The scared looking doggy is Leila – I included her because she’s cute!