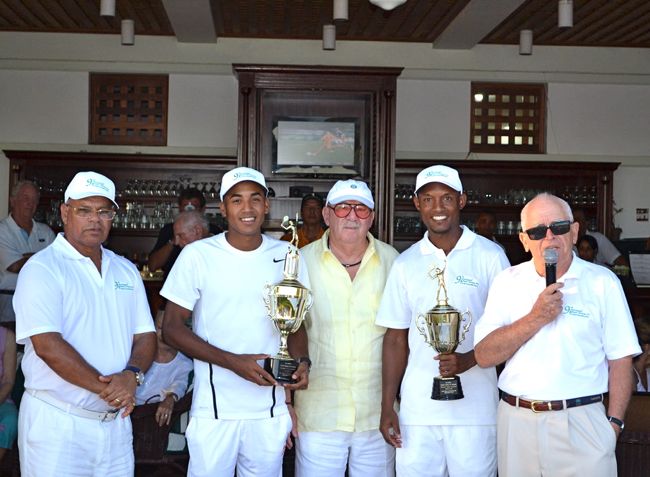 Last Sunday the 16th of March 2014, the 9th annual McDaniel Teaching Pros Tennis Tournament came to a very exciting close at the La Romana Country Club, as Francisco Concepción and Pedro Nolasco went head to head in the finals, just like in previous years…

Pedro Nolasco, champion of the McDaniel Teaching Pros Tennis Tournament from 2010 through 2012, was the favorite to win in 2013, but in the last moments of the 2013 final, Francisco Concepción, triumphed over Pedro to take home the 2013 championship title. This year, in an equally exciting match, Pedro fought back to reclaim his championship from Francisco winning in straight sets 6-3 and 6-2.

With more than US$50,000 raised through the kind donations of the Casa de Campo community and local businesses, a great crowd of supporters showed out to watch the final match. In the crowd were many fanatical members of the Casa de Campo tennis community, as well as the members of the McDaniel Teaching Pros Tennis Tournament organization committee, Alfonso Paniagua, this year’s honorary chairman, and of course Rick McDaniel, founder of the cause.

Following the match, the celebration continued at the La Romana Country Club, with the prize-giving ceremony and dinner for the players, ball boys and their families.

Every single participant of the tournament (whether successful or not) was presented with prize-money, while in addition to raising funds to continue sponsoring the education of more than 20 ball boys, the organization was thrilled to announce that enough was raised to also provide health insurance to the players.

Honored during the prize-giving ceremony was Alfonso Paniagua, Vice-President and Administrator of Costasur Casa de Campo, honorary chairman of this year’s tournament, who has always been a loyal supporter of the cause.

“He’s been a loyal supporter of the tennis programs here for more than 40 years. He’s a fair guy, he’s always done what is best for the players and ball boys,” Rick McDaniel, founder of the tournament shared with Casa de Campo Living.

Congratulations to all participants! And a BIG thank you to all the sponsors of the event!

The following collection of photos were taken on Sunday March 16th 2014 at the finals and prize-giving ceremony of the 9th annual McDaniel Teaching Pro’s Tournament celebrated at the La Romana Country Club in Casa de Campo: