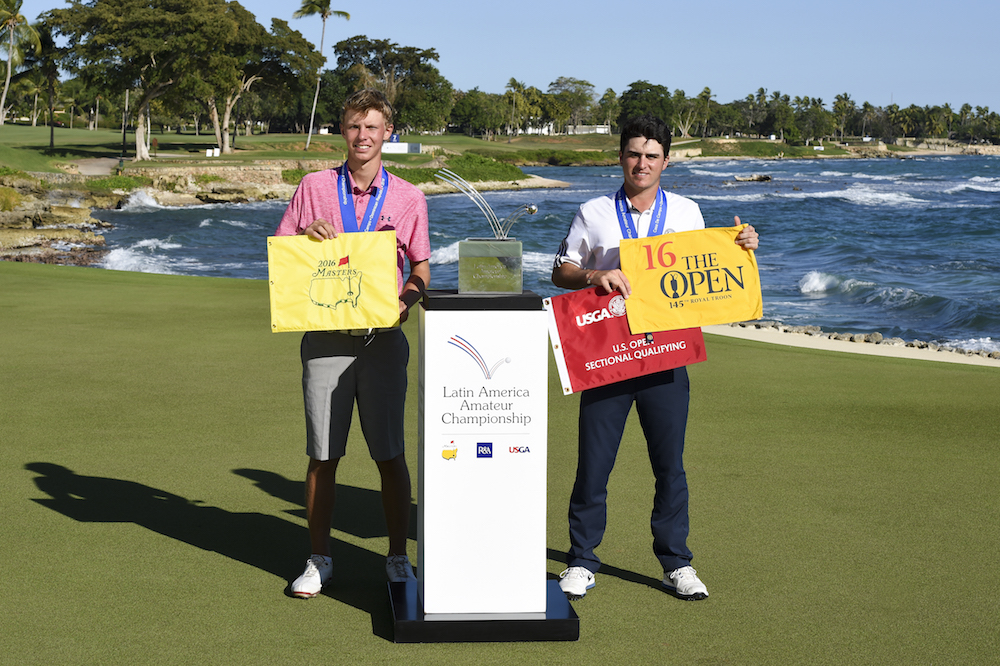 The Costa Rican will return to Casa de Campo, Dominican Republic, where he made history by becoming the youngest champion of the Latin America Amateur Championship in 2016. The Venezuelan was the runner-up and will seek his rematch.

When the week of the fifth edition of the LAAC begins it will be difficult not to think about the passage of the championship for this scenario three years ago, especially for those who were the figures of that occasion: the champion Paul Chaplet and Jorge García, who finished in the second place just one blow. That epic battle between these two great amateur players will be remembered, especially for them who will return with different objectives, one to show that achievement was not coincidence and another to get rid of that thorn of arriving as a candidate every year and not being able to confirm that place .

“I feel happy and ready to give my best as I did in 2016. It is a spectacular course and it will always be a special place. It is an extra incentive to play in a place where all are good memories. I think the keys are simple, you have to have tremendous patience, determination and know how to fail on the right side, “says Chaplet.

Paul Caplet of Costa Rica during the final round of the 2016 Latin America Amateur Championship at CASA DE CAMPO on Sunday January 17th, 2016. Enrique Berardi/LAAC.

For his part, García analyzes: “In 2016 the ball striking was the most constant and what helped me the most. I think it’s the most important thing in that field because the wind makes it interesting. I’ve been very successful on the green in recent months and I hope to keep those good feelings. My goal is to arrive with chances to win in the last 9 holes. If I do that, whatever happens, I’ll be satisfied with the result. I have been playing a very solid golf last year. I have found myself inside the field and I know I can take the cup next January. ”

The truth is that Chaplet discovered the secrets of Pete Dye’s design and managed to overcome the difficulties of Teeth of the Dog. The Costa Rican signed a final round of 70 strokes (-2) and with a total of 285 (-3) was champion of LAAC 2016 after surpassing one of the great favorites of that edition. “I remember that during the last round I did not realize what was happening until I got to the 17th hole. Winning the LAAC meant a lot because it let me know that I have the game to compete at the high level and that I can measure myself with the best. That victory was a great help for my career, it gave me confidence and changed my game mentality, “recalls the now young 19 year old.

“Playing the Masters was not only a unique experience, but also a dream that every young person has. Likewise, that dream is still in my head and, if it is repeated, I will have a little more experience playing at Augusta National. The LAAC is a tournament that offers the greatest opportunities in Latin America, this is one of the main reasons why young people are increasingly raising their level and they are also receiving scholarships to study and play in the universities of the United States. . The Masters, The R & A, and USGA have been a big part of my life and also of many amateurs in the region, “says Chaplet, born in San Jose, Costa Rica and currently studying architecture at Arizona State University.

Jorge Garcia of Venezuela during the final round of the 2016 Latin America Amateur Championship at CASA DE CAMPO on Sunday January 17th, 2016. Enrique Berardi/LAAC.

The Latin America Amateur Championship opened a host of doors to all fans in the region. In addition, with four disputed editions, he managed to exceed all expectations. “I had many doubts if it was really going to bring an important tournament for us to Latin America, but it has been an incredible experience to participate and see how the tournaments have been improving every year. I think that the players’ hunger for glory has grown a lot and they are becoming more focused. It also helped many of us to mature. Now we are planning the tournaments all year round based on the LAAC, “explains Pichu, born in the city of Anaco 22 years ago, and currently at Barry University, where he develops a specialization in Communication and Media Studies.

Chaplet and Garcia will be two of the most important candidates among the 108 fans that will make up the field of players that will be from January 17 to 20 in Casa de Campo, Dominican Republic, for a new edition of the Latin America Amateur Championship.