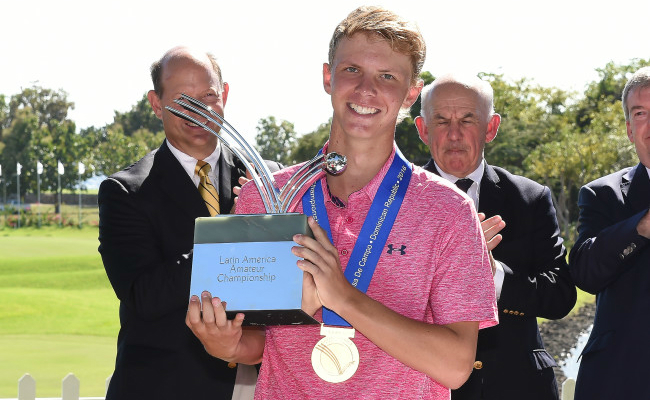 Paul Chaplet, from Costa Rica and the second youngest player of the championship, surprised everyone by taking the trophy in this year’s Latin American Amateur Championship, LAAC, in Casa de Campo and earning an invitation to play in the Masters in April.

The winner of the LAAC Dominican Republic closed with two-under 70 which gave him a three-under 285 and a one-stroke triumph over Venezuela’s Jorge Garcia. He will also become the first ever Costa Rican to tee off at the Masters.

“I can’t believe it, this is so big, too many emotions to describe them with words. It’s an unforgettable day, I knew I had a chance if I was patient and trusted in my game,” said the clearly emotional winner of the second edition of LAAC, the most important event for amateur golfers in Latin America.

Chaplet, along with earning an invitation to the Masters, secured spots in the U.S. and British Amateurs and is exempt into final qualifying for the U.S. Open in June and The Open in July, along with any other USGA amateur championship for which he is eligible.

On the other hand, runner up Jorge Garcia, also earned a place to play in the final qualifying stages of the 2016 U.S. Open and The Open.

It was an incredible final round where players rose to the occasion on the toughest holes of the Teeth of the Dog, with nerves and adrenaline pumping through their veins, Chaplet and Garcia fought until the end.

It’s a life changing opportunity really just to be able to play in a major, not even a regular PGA tour event; it’s all you can dream of being 16 – Paul Chaplet

“In 2012, was the first I saw the Masters on TV, when Bubba Watson won. Now I ‘m going to play, it does not seem real what I’m saying,” said the winner, who started playing golf at age 10 influenced by his mother and is still a high school student who hasn’t decided where his college destination will be: “I hope that some US university wants me,” joked Chaplet.

Paul Chaplet of Costa Rica and Jorge Garcia of Venezuela with the trophy of the 2016 Latin America Amateur Championship at CASA DE CAMPO on Sunday, January 17th, 2016. Enrique Berardi/LAAC.

Founded by the Masters Tournament, The R & A and USGA, and as mentioned on our previous article, the two main reasons why the Amateur Championship Latin America began was: (1) To give an arena a championship for elite and amateur players in the Latin America area a chance; and (2) To develop the game and inspire the game with hopes to see the proofs of this in the years to come.

I can’t tell you how many times we’ve heard prominent names say, ‘One of the experiences that I value the most is when I was in amateur, when I played in the US Open, I played in the Masters, I played in the Open Championship.’ They remember that they’re whole life, even if they go on to bigger things as a professional; so to do that, we really do think it will be a great thing for the Latin American region – Mike Davis, Executive Director of USGA

Stay tuned for more photos from this past weekend!