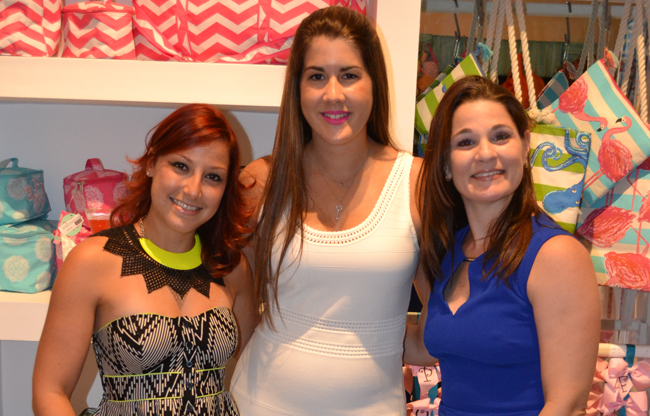 Bordatique sells all kinds of different products, such as washbags, towels, purses and bags in all shapes and sizes and in an array of bright colors with funky stripes, zig-zag, spotty and nautical patterns – all of which can be custom embroidered with initials, a name, a logo, or a message of

your choice. Say for instance you fall in love with one of the nautical beach bags, you could have it customized by adding your initials, your name, or maybe a cool message like “I’m on a boat”.

Taking part in the activity was Lauren Llenas de Sanchez, a photographer who specializes in architecture and interiors, who already a fan of the new store was seen with a straw clutch embroidered with her initials in a yellow that perfectly matched her outfit! “We have those clutches available in lots of colors, it’s a great piece for people who live here,” Patricia said.

Meanwhile it wasn’t long before the other guests became fans themselves, with merchandise literally flying off the shelves! “Our beach bags and coolers were very popular, and some new moms like Alice Caslini and Claudia Sturla bought some cute pieces for their new babies,” Patricia Peguero told Casa de Campo Living. “We have lots of new merchandise just in, and we will soon be getting even more for the Christmas season” added Patricia.

Having already officially opened the store at the beginning of the summer, this activity was Patricia’s opportunity to get together with some friends of the Casa de Campo community to show them what she is doing with Bordatique. A project Patricia has been planning since she first moved to Casa de Campo some 6 years ago, Patricia is happy that now her 2 children are a little older, she was able to make her dream a reality. And there is no doubt that Patricia’s life as a young mother has inspired some of the most popular products in store – the most adorable bibs and baskets, school bags and lunch boxes, for example.

Congratulations Patricia! We wish you lots of success!

The following collection of images were taken by Alejandro Heredia at the opening of Bordatique in the Marina Casa de Campo: