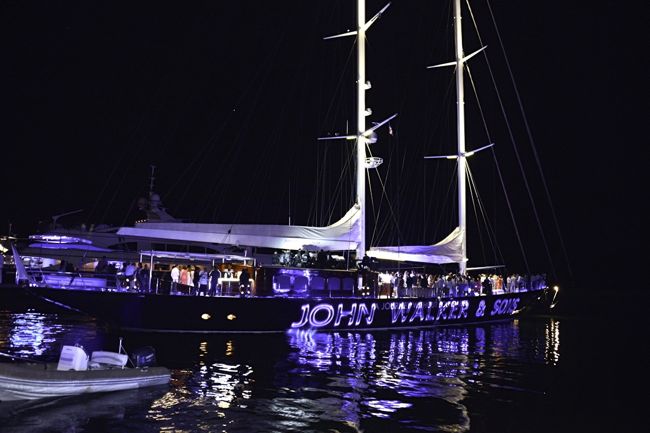 One of the principal parties held aboard the beautiful 56m luxury sailing yacht was the Johnnie Walker Blue Label cocktail party celebrated on Saturday March 1st. This gathering served as the welcome celebration and was hosted by Tom Jones, the John Walker global brand ambassador, who has been travelling aboard the ship since 2012.

During the exclusive cocktail, 4 Dominican professionals were recognized as Johnnie Walker Blue Label “Game Changers” – people whose pioneering spirit reflect the vision of the Walker family.

On this occasion the 4 “Game Changers” were Iván Gómez a motivational speaker who has climbed Mount Everest; Juan Marichal, a Dominican baseball player who has been inducted into the Baseball Hall of Fame; Lian Fanjul, president and founder of the Fundación MIR in La Romana and Aisha Syed, an accomplished musician.

Among the other guests were Casa de Campo villa owners, the actor Carlos de la Mota and CNN en Español presenter Mariela Encarnación, as well as José Jiménez, president of United Brands who represent Johnnie Walker in the Dominican Republic.

To end the evening, guests enjoyed a fabulous live concert with Amaury Sánchez, accompanied by an impressive light show.

The following collection of photos were taken aboard the John Walker Voyager in the Marina Casa de Campo:

John Walker & Sons Voyager is a glamorous modern and stylish sailing yacht, which was built in Bodrum, Turkey, and was sailed for the first time in 2011 with the name Regina.

The yacht, recently adapted as the John Walker & Sons Voyager, played an important role in Skyfall, the James Bond movie released in 2012. She was also a finalist at the 2012 Super Yacht awards in the category of boats over 40m.

The John Walker & Sons Voyager is worth an estimated US$14 million.