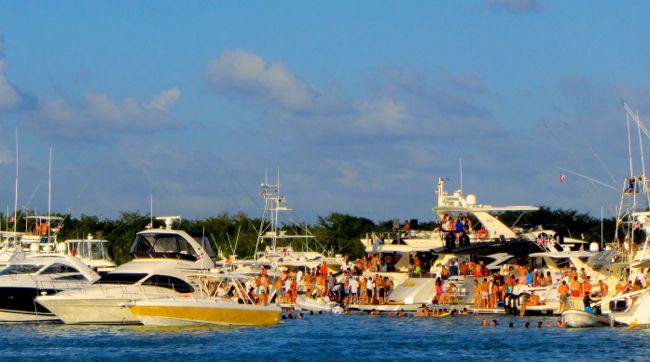 Every year anyone who is anyone in Casa de Campo, starts the New Year’s Eve celebrations at Palmilla, or rather at the Palmillaso – and this year was no exception with the addition of a drone and a seaplane. Yes a seaplane.

As every year, Casa de Campo Living once again set sail for Palmilla, and was this year happy to be invited on the catamaran of ERH Marine (@erhmarine on Instagram), who are a leading yacht distributor in the Dominican Republic, based in the Marina de Casa de Campo.

With a crew of more than 60 young revellers we set sail from the Marina Casa de Campo with bright eyes and bushy tails, ready for a day of sun, sea and champagne.

Arriving to Palmilla, we pulled up alongside the yacht of Alejandro Martinez-Lima who was partying with Amaury Nolasco of Prison Break, a frequent visitor to Casa de Campo – especially at this time of year.

And here is Amaury Nolasco waving to us as we arrived

Once we’d settled in and the party started to rage around us… we decided to take the drone for a spin, the only problem was taking off and landing at sea was not so straightforward. Fortunately our new friend Harry was brave enough to launch it and catch it with his hands – bravo Harry! So we’ll be bringing you a pretty cool video and some awesome photos very soon!

Then it was time for some liberal boat hopping and bikini dancing… as you do. That is after all the essence of the Palmillaso boat party.

And just when we thought the party couldn’t get any more awesome… a plane flew over head, and then landed in the ocean. The arrival of a seaplane definitely elevated the Palmillaso festivities to a whole new level, especially as the pilot and passengers jumped overboard for a dip in the ocean before jetting back to Casa de Campo. It doesn’t get any more legendary than that.

And so without further ado here are our photos of Palmillaso 2014 – we’ll be publishing the footage from the drone very soon!