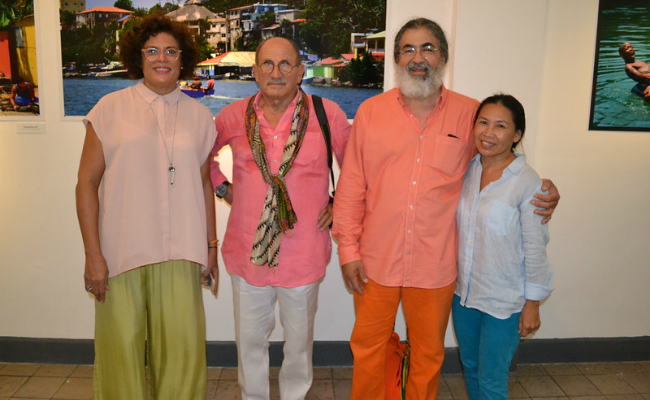 The photos show the everyday life of the Río Salao community, in La Romana, focusing on three key areas: the river, the colorful houses, and the people.

The images are available for purchase, since the main idea of the exhibition is to raise funds for the “Río Salao: Misión Posible” project, which seeks to improve the living standards of this community located on the banks of the river, providing it with a better quality of life.

Some attendees were able to get first pick for purchasing photographs at the exhibit and in addition to being able to take home one of the fabulous collection items, they donated to a great cause through their purchase. There are still beautiful photos available for purchase so we encourage you to visit the exhibit for yourself and choose which photo(s) you will be taking home! Hurry up because from what we were able to see at the inauguration they will be going FAST!

Río Salao is the populated area that can be seen from the Charles Bluhdorn bridge in La Romana, right before the entrance to Casa de Campo and opposite the Muelle Turístico La Romana (Tourist Port). Its view is very similar to that of the sectors of capital, La Ciénaga and Barquita, except that it has a special touch of color, thanks to community action that has developed in recent years in the neighborhood, in order to change the image and the attitude of its people.

The opening was attended by various personalities from our Casa de Campo community, in addition to children and neighbors from Río Salao and several local journalists.

For Mr. Fini, the aim of the exhibition is “showing the human quality that can only be born in a place where the space is so small, that physical contact of a house or a window with the other, makes everything look like it’s one family”.

The exhibit will be open throughout the month of October at the Aldea Cultural Santa Rosa de Lima.