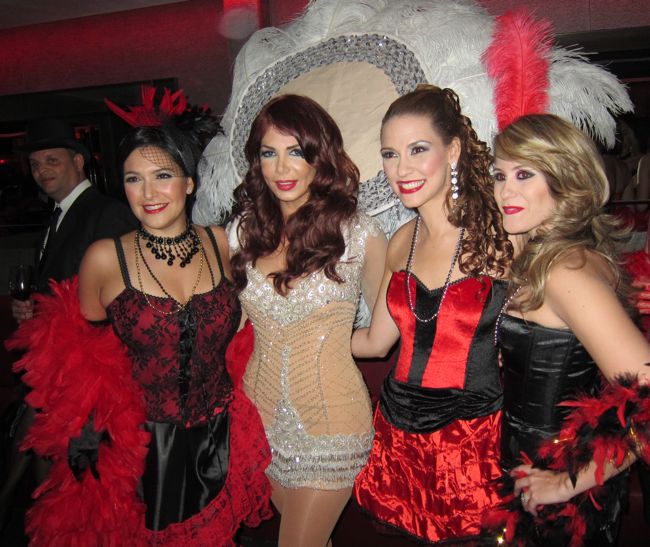 Moulin Rouge has to be one of the best themes for a party ever; couple women in corsets, suspenders, lace and feathers with men in top hats and you have the recipe for one very sexy night out! And the recent Moulin Rouge themed birthday party of Judy Dorrejo-Inchaustegui, was exactly that; swelteringly hot and sexy from start to finish – congratulations Judy and Happy Birthday of course!!

Arriving at one of Santo Domingo’s most fashionable hot spots “Grappa”, guests were transported through time to the streets of Paris to the Moulin Rouge, where they were greeted by an exact replica of the Moulin Rouge windmill, scantily clad waitresses (and topless waiters!) handing out beads and glasses of champagne, as well as (of course) the paparazzi and a rather naughty tiered cake.

And just when we thought the party couldn’t get any more impressive – Judy arrived. Dressed in a custom made, exact replica of an outfit worn by Nicole Kidman in the actual Moulin Rouge movie; a bejeweled dress complete with giant halo of white feathers – Judy, accessorized by her handsome husband Sixto Inchaustegui, looked simple breathtaking.

The rest of the night passed in a whirlwind of champagne, with dancing and singing with sexy entertainer “Divine”, who had been flown in from Miami especially for the occasion and who also sang at Sixto’s 70’s themed party celebrated in the Marina Casa de Campo in July 2009 – click here for photos!

The photos of this party tell the story better than I do – so enjoy!

For those of you who do not know Judy and Sixto, they are Casa de Campo villa owners, who live in Santo Domingo, but who often visit Casa de Campo La Romana – where they like to take day trips to Palmilla on their boat from the Marina Casa de Campo and have been known to enjoy and/or host the occasional party!