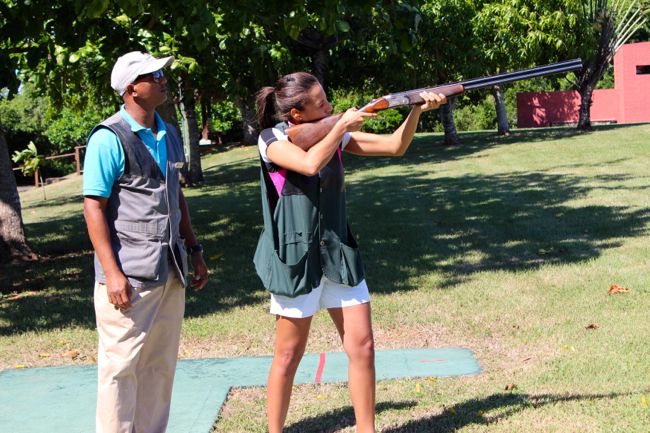 The Shooting Center is something of a mystery to many Casa de Campo guests and residents alike – if golf is your passion, or you fill your days at the beach with the kids – why venture up to the Shooting Center?

Well during the recent Dueños 2013 celebration hosted by Costasur and Casa de Campo last Saturday the 23rd of November, many Casa de Campo villa owners did exactly that, and took aim in the Dueños 2013 Shooting tournament.

The ideal sport for the tropical Dominican sun, shooting doesn’t require too much energy, but packs a big adrenaline punch, making it a fun way to pass an afternoon or morning. There is nothing quiet like that feeling you get as you see the clay burst into pieces like a firework… so thrilling it makes you yearn to go back and give it another shot time and time again!

Each competitor of the shooting tournament got 25 shots to prove themselves as Casa de Campo’s best marksman (and woman).

The winners of the shooting tournament and all the other tournaments held throughout the day of Dueños 2013 were awarded trophies at the Beach Party celebrated at Minitas Beach later that same evening.

The following collection of photos were taken during the Shooting tournament of Dueños 2013 in Casa de Campo: