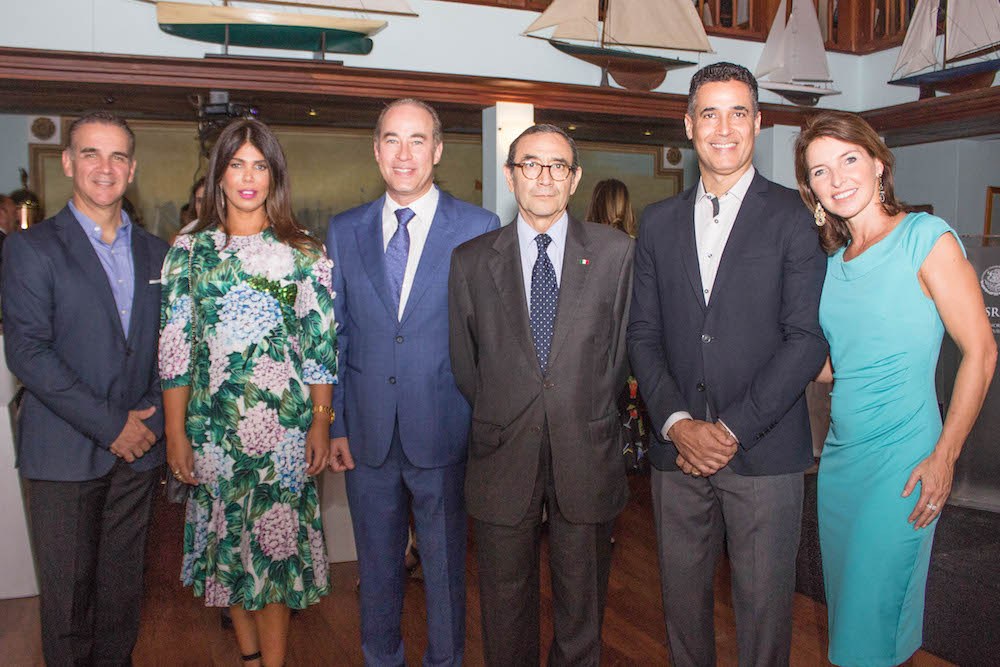 On Friday, September 1st, an opening cocktail was celebrated at La Marina Casa de Campo Yacht Club for the Honorary Mexican Consulate hosted by the Honorary Consul Sixto Inchaustegui, who is a long time community member along with his father and family. An honorary consul is someone designated by a foreign government to look after the affairs of their citizens in foreign countries. The event was attended by the Mexican ambassador in the Dominican Republic, Carlos Tirado Zavala, who came in support of the host and was open to meet the community members that came to the opening.

The ceremony was held in the main hall of the Yacht Club in La Marina Casa de Campo, where guests were received by the sound of saxophone tunes as well as offered wine or margaritas. As the night progressed more and more people joined the affair and talked amiably amongst themselves as well as enjoyed a delicious menu of Mexican inspired hors d’oeuvres which included, flautas, mini tacos, corn arepas, guacamole, pico de gallo and more.

During the ceremony, the Mexican ambassador to the Dominican Republic, Carlos Tirado Zavala was the first to talk and acted as “host for his host” as he explained. Mr. Tirado started his speech by talking about his home country of Mexico and presented a video about the beauty and everything that the country has to offer. He also stated that both countries are very special neighbors with very similar affinities, and the diplomatic relationship has developed as normal between its capitals, but they wish to continue growing throughout the different cities and a very effective way to do so is by collaborating with various outstanding personalities that live in the country, be it Mexicans residing in the country or even better locals that are willing to contribute and help out. The office will be representing various cities; La Romana, San Pedro de Macoris, Hato Mayor, and Seibo.

One of the main purposes of the honorary consulate is to deepen the relationship between Mexico and the Dominican Republic by sharing all the cultural resources that the Embassy has available by means of art exhibitions, scholarships, movie screening they want to work closely with the people and give them a place where they can get together and learn from each other and the culture. Regular meetings and projects will take place along with Sixto and the senators of the various provinces to make sure that they fulfill their goals. Mr. Zavala also announced that soon they will be hosting their first activity in Casa de Campo – we will let you know as soon as we know all the details. He also thanked Sixto Inchaustegui for his disposition and his collaboration with the Embassy.

Sixto later addressed the guests, which included the Deputy Minister of Consular and Migratory Affairs of the Dominican Republic, Marjorie Espinosa, the Senator of El Seibo, Santiago Zorrilla, the Vice Mayoress of La Romana, María Guerrero, Mrs. Lian Fanjul de Azqueta, Mr. Andres Pichardo, Mr. Juan Velázquez and many more Casa de Campo and La Romana community members. He thanked everybody for their support in his new charge and elaborated on his functions which Mr. Zavala had mentioned: helping the Mexican citizens in the area, and broadening the relationship between both countries. He also extended the invitation to visit Mexico, and get to know the country he guarantees that, as has happened with him, “you will be captivated by its magic.”

Marjorie Espinosa was the last one to speak. As a representative of the government, she stated that they were able to see first-hand everything that Mexico has to offer and have learned many things from the country and have started to emulate some of the practices they do here in the Dominican Republic that will benefit the population. She also congratulated the Honorary Consulate’s initiative to strengthen the relationship between the countries not only in the capitals but throughout the country working directly with the people with the help of the different senators and representatives of the provinces. She thanked Sixto for his exemplary behavior and career, and for putting his experience to helping Mexico here in the country.

Everybody was invited to join in on a toast to the bright future of the Honorary consulate and together chanted “Que viva Mexico!” It was a very special night to those involved and we wish them all the success in achieving their goals. We are sure that we will hear from them soon and all the cultural activities they have planned. For now, the offices will be located at Sixto’s home in Los Altos building 16 apt 301 so if you have any questions or wish to know more please don’t hesitate in contacting him.

The following images were taken by Laura Perdomo during the opening cocktail of Honorary Consulate of Mexico at La Marina Casa de Campo Yacht Club on Friday, September 1st: