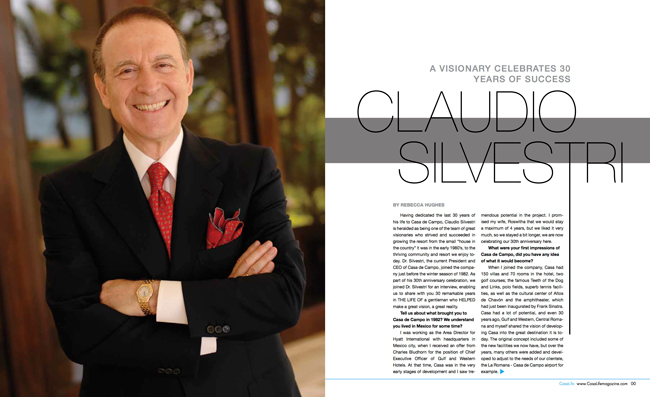 We are very proud to announce the arrival of the latest edition of CasaLife magazine – a very special issue dedicated to Dr. Claudio Silvestri, President and CEO of Casa de Campo who this season is celebrating the 30th anniversary of his arrival in Casa de Campo.

To mark this very special anniversary, our CasaLife President, Philip Silvestri, son of Dr. Claudio Silvestri had the idea to not only interview his father in this issue, but to also reach out to his father’s many friends and colleagues giving them the opportunity to be part of the celebration in their own words. These congratulatory notes appear at a glance as “ads”, but upon close inspection are actually heart-felt messages from those who have been touched by Claudio and his dedication to Casa de Campo (and beyond) both personally and professionally. We recommend you take the time to read these notes – among which you will also find a special insert from Alfy Fanjul and J.Pepe Fanjul, representing the Central Romana Corporation.

A sneak preview of our interview with Dr. Claudio Silvestri

The interview with Dr. Silvestri conducted by our the editor of Casa de Campo Living and Social Editor of CasaLife – Rebecca Hughes (aka yours truly), offers readers a rare insight into this remarkable man, who when he arrived in Casa de Campo in 1982, when the resort had just 150 villas and 70 rooms in the hotel. Over the subsequent 30 years Dr. Claudio Silvestri worked alongside Central Romana, Alfy Fanjul, J. Pepe Fanjul, Papo Menéndez, Eduardo Martínez Lima, Alfonso Paniagua and their partners to develop Casa de Campo into the thriving resort and community we all know and love today.

“I am privileged to be able to honor my father in such a unique way, one in which his very friends and colleges wanted and insisted, in taking part. His persistence and passion have been practically legendary and an inspiration to many, which is why we wanted to share with our readers this fabulous interview and celebration of 30 amazing years. The reactions have been coming in and have been incredibly positive and we are thrilled with the most important reaction of all, the man himself – Claudio Silvestri!”

Also included in this special edition of CasaLife is coverage of glamorous events that took past in Casa de Campo as well as in Santo Domingo – such as the Damas Diplomaticas event at Cartier, the launch of the new Hublot King Power Arturo Fuente watch, Dueños 2012 hosted by Costasur and Casa de Campo, as well as the CasaLife and Chivas event at Punta Minitas #34.

We hope you enjoy and treasure this “celebration” issue of CasaLife!

This new edition of CasaLife is now in distribution and will be delivered to your Casa de Campo villa with your copy of the new issue of TODO Casa de Campo magazine.