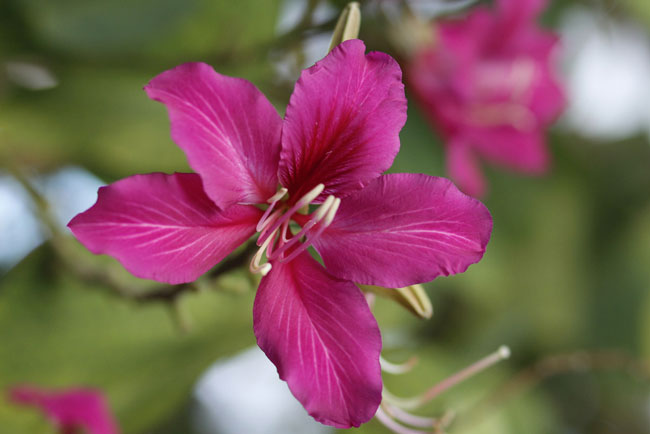 Spring has arrived to Casa de Campo and all around us the neon blooms of the Casa de Campo springtime are showing their colorful faces.

Agave of all types can be seen all over Casa, literally everywhere. Perhaps the most beautiful is the agave americana. It looks a lot like a giant green spiky cactus… but when it flowers, it’s magnificent. Sadly it takes years to mature, and each rosette flowers just once and then dies. In bloom, its sweet nectar attracts hummingbirds, such as the vervain hummingbird that lives here in Casa. Agave, despite appearances, does not belong to the cacti family, and is used to make tequila, as well as syrup and sugar, although here it is usually only used ornamentally.

The hibiscus originates from America and Africa, has more than 220 species that derive from the Malvaceae family and are generally found in warm environments. The species most typically found in the Dominican Republic is known as “Sangre de Cristo”, Christ’s Blood (hibiscus rosa-sinensis) and is a national symbol, often used as hair decorations on national holidays. However, here in Casa, magnificent Hibiscus flowers can be spotted in neon pink and orange, these were found on hole #5 of the Links golf course, while we’ve spotted the “Sangre de Cristo” around the Teeth of the Dog.

With its long cascading translucent jade-green flowers beneath a canopy of pale green foliage, the jade vine is one of the most beautiful and elegant of all tropical climbers. It comes from the rainforests of the Philippines, and is a member of the same family as peas and beans, also closely related to the kidney bean and runner bean group.

Numerous species of bauhinia exist in the Dominican Republic, many introduced from Asia, principally from Burma, while others are native to the island of Hispaniola. The type we spotted in Casa is the Hong Kong Orchid Tree, regarded as a symbol of wisdom and so called because their flowers look just like orchids. Bauhinia flowers can be red, pink, purple, orange, or yellow, and flower from late winter to early summer. We’ve spotted a number of Hong Kong Orchid Trees in Casa; on the golf courses, around the running track and even along the side of the road.

This article was originally published in the spring edition of TODO Casa de Campo last year.