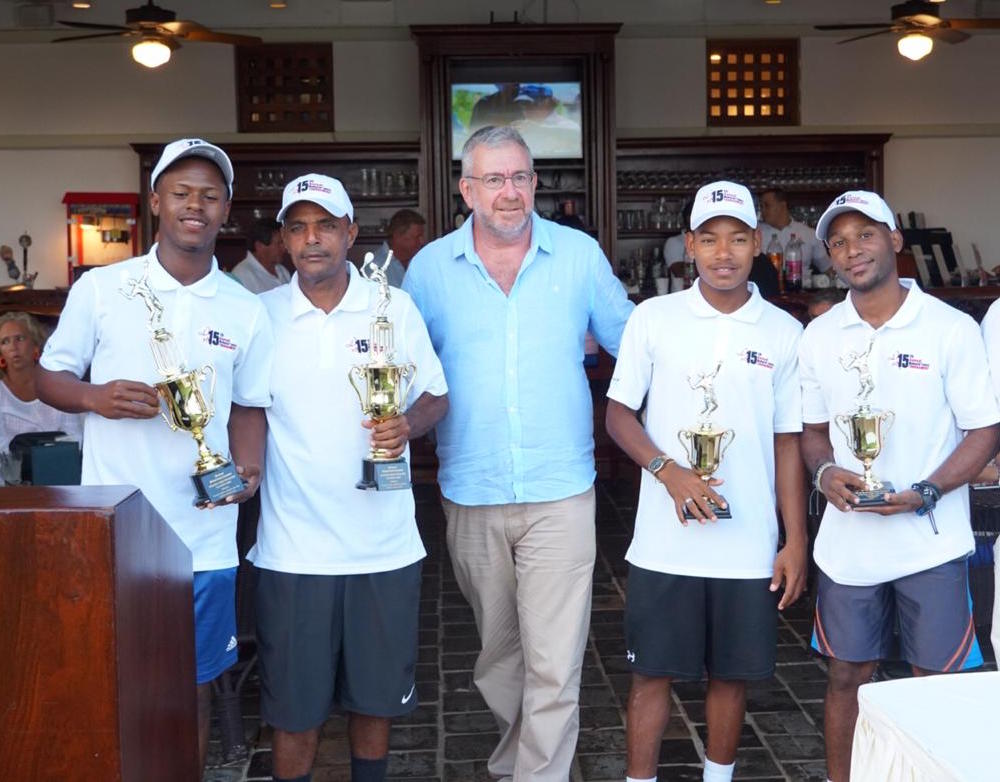 The McDaniel’s Tennis Tournament played from Thursday, March 4th through Sunday 8th was an excellent source of friendly competition in the name of a wonderful cause. Many from the Casa de Campo community came out to support the McDaniel Family Foundation’s initiatives and see the close matches between the ball boys and instructors of La Romana Country Club and La Terrazza Tennis Club.

The McDaniel Family Foundation, celebrating its 15th anniversary this year, has sought to sponsor the education of Casa de Campo’s ball boys, and through their annual fundraising tournament have, year after year, succeeded in assisting a growing number of boys (and even a few girls). The doubles format, with a pre-arranged draw that included 22 players from La Terraza and La Romana Country Club, is a favorite for players and spectators and provides more opportunities to catch exciting games on the courts. Sports fans sat with a perfect view on the sideline of the main court, where Winter Jones and Susano Botello stood out, and earned this year’s championship tournament. In another court, Yonaiky Encarnación and Jonathan Benjamin had played against Pablo Basilio Santiago Diaz in the Ballboy tournament that also took place this year where Yonaiky and Jonathan were crowned champions!

The awards ceremony followed the tournament, bringing the sponsors, players, ball boys, and their families together at the La Romana Country Club. Every single participant of the tournament (winners or not) was awarded prize-money. Rick McDaniel thanked everyone once again for their continued support throughout the years and shared with everybody that the foundation will be able to continue providing Player’s Health Insurance, all the Ball Boy’s Scholarships, the Player’s Prize Money, and three College Scholarships and a scholarship for Juan Carlos Cordero who has finished his technical degree in Physical therapy and will continue thanks to the scholarship training as a personal trainer!

During the ceremony, Mr. McDaniel presented Dr. Jose Avila, former Casa de Campo ballboy who won a scholarship and became a doctor helping out the La Romana community, with this year’s honorary chairman plaque thanking him for all his help providing free medical checkups for all the ballboys and their families. Mr. McDaniel also presented for a second consecutive year a special plaque for outstanding sportsmanship to ball boy Adonis Gaston who thanked everybody in English. This year the foundation wanted to do something different this year and introduce the players who would be receiving this year’s scholarships for university, one of which Junior Alexander, introduced by committee member Janet Stingel, addressed the public in English. We also met three players who benefitted from the health insurance this past year.

Congratulations to the winners and all the players, sponsors, and supporters for another successful and wonderful McDaniel Tennis Tournament 2020! A big thank you to everyone for your generous support! Remember, it’s never too late to donate! See the sponsorship options below.

The following collection of images by Yafranny Melo were taken during the finals of the 15th annual McDaniel Tennis Tournament in Casa de Campo: