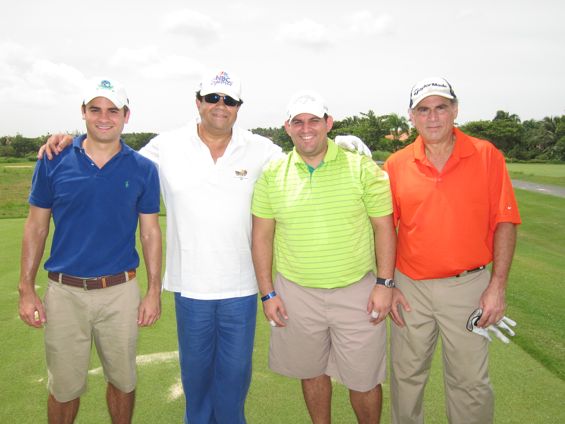 On Saturday the 13th of August the Fundacion MIR Family Weekend for Life event was celebrated in the Casa de campo resort with fun golf and tennis tournaments, followed by a wonderful celebratory dinner, dance and after party! As I spent the entire day taking photos of everything and everyone, in this article I bring you photos and the results of the golf tournament, which was played on the La Romana Country Club Golf Course.

The Fundacion MIR Family Weekend for Life golf tournament began at 1pm shotgun, when the Fundación MIR’s golfing supporters teed off around the beautiful La Romana Country Club Golf Course and played a fun and only slightly competitive round of golf in the glorious sunshine.

What a wonderful day! Golfing in Casa de Campo for the Fundación MIR!

Along their way around the Casa de Campo golf course, golfers were able to enjoy snacks and drinks provided by the event’s sponsors, such as Ron Atlantico – who were serving Mojito’s and giving out Ron Atlantico visors (which I was thrilled about!)

The following results of the golf tournament were sent to us from Dave Pfisterer, Casa de Campo’s Head Golf Professional:

Here you can enjoy our photos of the golfing event in Casa de Campo La Romana: