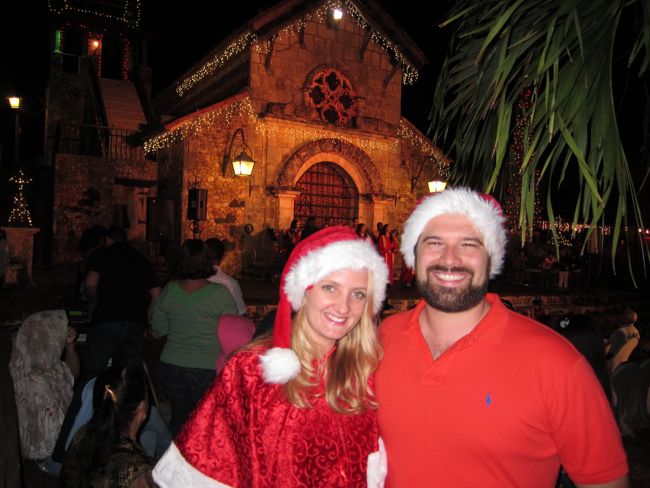 Celebration #1: Christmas Eve
In England we don’t usual celebrate Christmas Eve, but here in Casa de Campo we do – with a special dinner (normally at La Piazzetta in Altos de Chavón), followed by “Midnight Mass” at 10pm at the Altos de Chavón St Stanislaus church.

Celebration #2: Christmas Day
This is the real day of celebration (for me anyway), so I intend to do the following:
• eat breakfast late and outside, whilst enjoying the gorgeous view of the ocean over the Teeth of the Dog golf course
• sunbathe and drink champagne by the pool
• dress Philip up as Santa Claus, dress myself up as Mrs Santa Claus and take a drive around Casa de Campo in our Christmas golf cart
• enjoy a christmas cocktail at Minitas beach

Los niños were tucked away in their camas,
Some in long underwear, some in pijamas,

To bring all children, both buenos y malos,
A nice batch of dulces y otros regalos.

Outside in the yard there arose such a grito
That I jumped to my pies like a frightened cabrito.

I ran to the window and looked out afuera,
And who in the world do you think that it era?

Saint Nick in a sleigh and a big red sombrero
Came dashing along like a crazy bombero.

And pulling his sleigh instead of venados
Were eight little burros approaching volados.

I watched as they came and this quaint little hombre
Was shouting and whistling and calling by nombre:

Then standing erect with his hands on his pecho
He flew to the top of our very own techo.

With his round little belly like a bowl of jalea,
He struggled to squeeze down our old chiminea,

Then huffing and puffing at last in our sala,
With soot smeared all over his real suit de gala,

He filled all the medias with lovely regalos-
For none of the niños had been very malos.

Then chuckling aloud, seeming muy contento,
He turned like a flash and was gone como viento.

And I heard him exclaim, and this is verdad,
Merry Christmas to all, y Feliz Navidad!