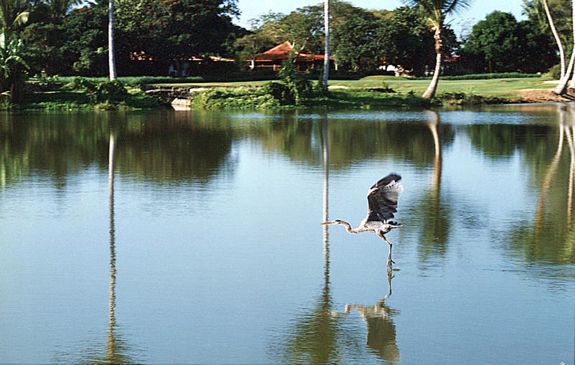 In this week’s ‘Memories of Casa de Campo’ post Carol Burke seduces us with images and words recalling the simplicity, nature and beauty of Casa de Campo 20 years ago – of course Casa de Campo is still very beautiful, just a little more cosmopolitan than it was back then!

“Clouds come floating into my life, no longer to carry rain or usher storm, but to add color to my sunset sky.” ~ Rabindranath Tagore

When I lived in Casa de Campo years ago, it was truly a simple “country house” – a place where one felt very close to nature.

Here in Casa de Campo we were surrounded by trees, flowers and grasses, sea and sky. Many people in Casa liked to walk for exercise. There were no walking paths, so everyone who walked, walked on the golf courses. I often encountered Henry Kissinger with his family and entourage walking on the Teeth of the Dog.

Sitting on the edge of the Teeth of the Dog, you can see the colorful fish in the sea, the birds hunting for fish, beautiful water patterns in turquoise, and weather systems coming in from the horizon.

One morning while walking along the edge of the Teeth of the Dog, I saw a huge cloud on the horizon, heading towards us at a fast pace. I waited and soon the cloud was all over the course and had turned the Teeth of the Dog into a mysterious place of fog and mist. In a few minutes it had passed on and everything was bright and clear again.

Almost every day there is a time when large cumulus clouds float by in the blue sky. They form themselves into fantastic shapes: a lion chasing a gazelle, a king sitting on his throne, a chariot race across the sky.

Even our bottle of rum has clouds reflected in it.

One day we were sitting poolside in the sun and noticed a black cloud on the horizon. Usually black clouds indicate a disturbed and unstable condition. This one moved towards Casa very quickly and in a few minutes the bright blue sky had turned to black. It was a violent squall which slammed doors shut and broke branches. Then it was gone as fast as it had come.

But once in a while everything in the atmosphere turns a greenish color, and this means there may be a storm nearby.

People say that the most serious weather comes in from the south, so don’t worry too much if it’s coming from the north or the east.

Sometimes the sky is clear and the sun is shining, while at the same time, rain is falling. When this occurs, people say, “The witches are fighting.”

One thing you can always count on is that at the end of the day there will be a beautiful sunset and the anticipation of a shimmering starry night.