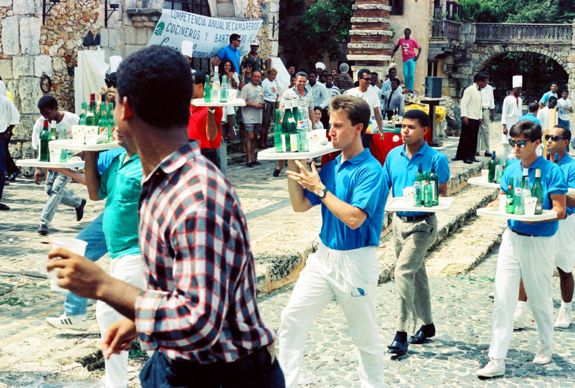 An announcement goes out – come to Altos de Chavon to celebrate – an arts and crafts festival, a food festival, music, dance, gallery opening, and whatever your imagination brings forth.

People gather during the day and the night, their spirits are raised by the event itself and by the magical atmosphere of Altos de Chavon, a place built from the rocks of the earth, situated among the clouds, above the river, and embraced by the sky.

Sometimes an event celebrates the romance of merengue where couples dance together in the evening light while the music creates an exhilarating and euphoric atmosphere. Other times Altos showcases the arts and crafts found in the Dominican Republic.

I remember one fantastic day when Casa de Campo wanted to know who the best and fastest waiters, cooks, and bartenders were. They devised a festival of competition where the contenders walked and ran through Altos de Chavon while holding trays laden with bottles and glasses.

The competition begins and one golf ball drops!

The contestants have a course to run throughout Altos de Chavon. At times they were required to hold a golf ball in a spoon in their mouths while navigating streets and stairs.

Upstairs and downstairs the race is on

This unique Altos event traveled through all the highways and byways of Altos.

On the main road – a drink spills!

They carried their trays of drinks under planks, and over planks!

One bottle has fallen.

Sometimes the road gets a little crowded.

The competitors demonstrated grace, dexterity, focus, and athletic ability all the while carrying a tray full of drinks in glasses and bottles without dropping anything.

The balance beam on a barrel!

Walking up one side of a plank, balance on the top, then walk down the other side to the ground without a mishap is one of the most difficult tasks of the contest.

Walking the plank is the final test.

Altos de Chavon was famous for its food festivals too, especially for the Italian Festival.

Buffet tables with garlands of vegetables.

Serving dishes of octopus and other salads, dishes with roasted eggplant and tomatoes, peppers, hams, cheeses, breads, pastas, and desserts were in abundance.

Dessert served over the Chavon river.

The Piazzetta restaurant was always the center of the Italian Festivals and tables and tents were placed outside.

La Piazzetta gets dressed up for the festival.

The artist for the food and beverage department, Carlos, made a large sculpture for each food festival.

After an art exhibit opens in the gallery there were receptions outside on the plaza.

Young artists gather after their opening.

An outdoor art reception in Altos.

One of the perennial and most popular festivals of all is the arts and crafts fair.

Artisans from all over the Dominican Republic come to show their imaginative creations.

Artisan booths at the edge of Altos.

Visitors from all over the Dominican Republic flock to the Altos Arts Festival.

Arts and Crafts festival in Altos 1988.

As the sun sets we bring our purchases home to Colina to welcome the evening.

Sunset View from the Colinas of Altos de Chavon.

REMEMBER: This Saturday the 12th of June, Casa de Campo Living is recreating the Altos de Chavon arts and crafts fair with our first Casa de Campo Living BAZAAR! The Bazaar will be in Altos de Chavon near the gardens from 3pm to 8pm with over 50 stalls selling a huge range of products as well as FREE drinks by Ron Atlantico and Nespresso and GREAT food options by Onno’s bar and Papa Jacks. Click here for more info.