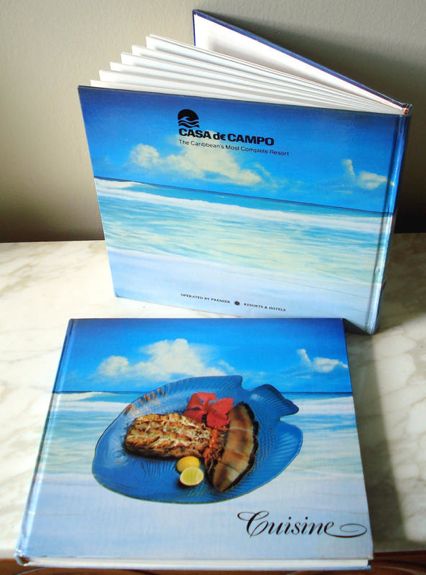 One of the very nicest things about life is the way we must regularly stop whatever it is we are doing and devote our attention to eating.
— Luciano Pavarotti

It was an exciting time in 1991 when Casa de Campo decided to produce a cookbook featuring their fabulous cuisine.

First the recipes and photos had to be gathered and formed into a rough draft. Later the work on the actual book production continued with a professional photographer from Santo Domingo, Max Pou, and a book publisher, Imprenta El Heraldo, C por A.

The food director asked me to take preliminary photos of the food and restaurants to be used as a guide to show the team from Santo Domingo the idea and layout of the book.

This was a lot of fun and very interesting. Helping to create the cookbook gave me a chance to take photos of all the food and restaurants of Casa de Campo from an insider’s viewpoint.

The President/CEO of Casa de Campo, Claudio Silvestri, wrote a wonderful forward for the book addressed to all the patrons of Casa de Campo, and praising the efforts of the “professional food artists” and specialists who contributed to the collection.

Breads were freshly baked and piled up in the Amphitheater to find out if they would make an interesting photo.

The chefs prepared some dishes and I took photos of them. The Red Snapper with Roasted Pepper and Basil Mashed Potato from Casa del Rio looked delicious and had a cute name, “Chillo Sunshine” and was served with a small sunflower.

The dish from El Sombrero was a mixed grill of Fajitas with Peppers and Onions served with Corn Tortillas. These photo shoots were making everyone hungry.

The chefs from La Piazzetta set up a table to show the ingredients in the Antipasto buffet,

and another table to demonstrate how the Piazzetta Tiramisu was made.

In front of Café El Patio the chefs prepared a dish of Tostones in a dramatic setting using a branch full of fruit from a platano tree.

Tostones are one of the most popular snacks in the Dominican Republic. They are made from platanos and fried twice. El Patio made excellent tostones.

The chefs of Lago Grill set out a fresh snapper and Dominican basil on a grill along with the other ingredients for a Pesto Sauce to show how their famous Chillo in Pesto was made.

Basic Ingredients of the Kitchens of Casa de Campo