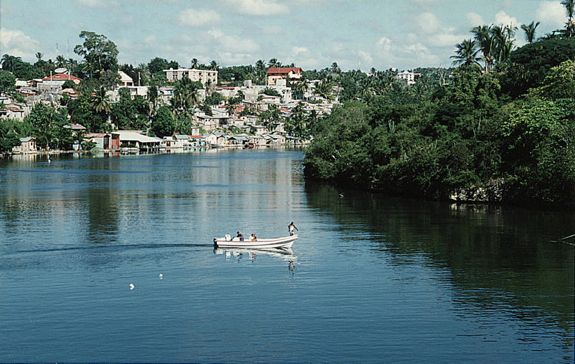 A trip to La Romana was always interesting. Passing over the La Romana bridge spanning the Rio Dulce one could view the town of La Romana, and the La Romana Hunt and Fish club on the right, and from the left side, the port of La Romana.

La Romana was always a mysterious and fascinating place to me. Walking around the streets of La Romana and taking photos, there were endless whimsical and awesome scenes unfolding before one’s eyes.

I was told that, a few centuries ago, the town was named La Romana because the word, la romana, signifies a weighing station, where all sugar being shipped from the colonial plantations was weighed.

The bridge to La Romana has a commemorative plaque noting that Charles Blühdorn, the creator of Altos de Chavon, presented this bridge to the people of La Romana.

At Christmas time, La Romana was very creative with their Christmas trees. There was a de-forestation law during the time I lived there, so no actual trees could be sold for Christmas, unless they were trees living in a flower pot.

I remember Pablo’s Department Store made their Christmas tree each year from dozens of empty plastic water bottles piled into a 5-meter-high pyramid, lighted from within, and decorated with red bows. It was beautiful and looked like a snowy tree.

Along the main road at Christmastime you could buy white painted branches stuck into cement in paint cans. These worked really well, and made beautiful Christmas trees after they were decorated.

People who come here from the United States or England, and many other countries, expect mail delivery every weekday. (“Neither rain, nor snow, nor sleet, nor hail shall keep the postmen from their appointed rounds.”) It was a big surprise when we found that there was no postal service or mail delivery here like we were used to at home.

After a few years, we had almost given up trying to get mail. Then a new mail service started in La Romana, the Express Parcel Service, a company which would obtain all mail from the customs. I drove into La Romana at least twice a week to pick up our mail from EPS. It was a great service because we could receive packages and mail from home.

La Romana is an art colony too. Many artists live here. Jorge Silvestre, a well-known La Romana artist, painted a mural on the front of the popular H-M grocery store in town.

Eduardo’s Gallery used to be the place in La Romana to buy paintings or have your art works framed. When one stopped by Eduardo’s one would see many La Romana artists buying their art supplies or delivering their paintings.

Sometimes one would see artists at work on the streets of La Romana instructing children on the art of architectural painting.