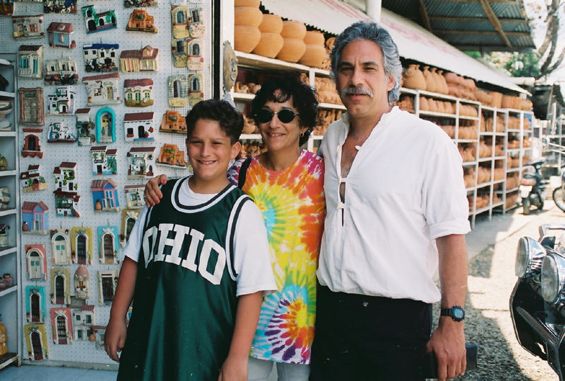 In this week’s ‘Memories of Casa de Campo’ post, Carol Burke, our weekly writer takes us on yet another journey to La Romana town – this time in the search of artwork. All these photos were taken in the 1990’s – and you can see how little and how much La Romana has changed……in some aspects it looks the same and in others it looks totally different!

“Though we travel the world over to find the beautiful, we must carry it with us or we find it not.” — Ralph Waldo Emerson

“When you have only two pennies left in the world, buy a loaf of bread with one, and a lily with the other.” — Chinese Proverb

One of the pleasures of living in Casa de Campo was the abundance of art available.

In Altos de Chavon there was a Gallery for contemporary art, and an Archaeological Museum for the Art of the Pre-Columbian Taino people, as well as a gift shop and frequent art fairs.

When friends and family visited us in Casa de Campo in the 1980s and 1990s, and wanted to look at the local arts and crafts, I sometimes showed them a place just outside of town. I don’t remember its name but it was a giant supermarket of Dominican arts and crafts. Our visitors, Tyler, Joyce, and Kenny Margolin of Cleveland, Ohio found some great souvenirs there.

The Margolins of Cleveland, Ohio in La Romana

However, the first Dominican arts and crafts display was just outside Casa de Campo.

About a half-mile outside the gates of Casa de Campo and before one reached La Romana, there was a permanent open-air art market.

Driving through La Romana to the arts bazaar west of town, we could see permanent works of art on buildings and walls.

Jorge Silvestre’s mural covered the front of H_M Grocery Store, and another artist created an imaginative mural on a wall in La Romana.

Many paintings from the local artists had animal themes. The most popular animals were oxen and fish, but only a few were about cats.

A Cat Among the Butterflies

Some paintings celebrated the ubiquitous lizard,

and there were many still-life paintings of domestic scenes.

Sometimes we would see an artist busy at work on a La Romana street.