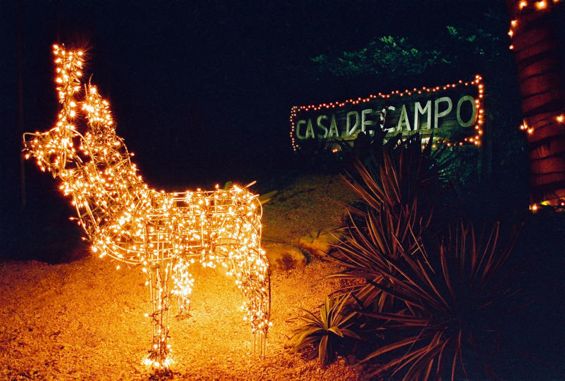 In this week’s ‘Memories of Casa de Campo’ post, Carol Burke our creative and talented weekly writer brings us a charming Christmas story – Casa de Campo at Christmas time! Beautiful photos and tales to get us in the festive spirit and help us to prepare for the Bazaar Navideño this weekend; Saturday and Sunday the 18th and 19th of December in Altos de Chavón.

“The best of all gifts around any Christmas tree: the presence of a happy family all wrapped up in each other.”
— Burton Hillis aka Bill Vaughan, American columnist and author (1915-1977)

“When we recall Christmas past, we usually find that the simplest things – not the great occasions – give off the greatest glow of happiness.”
— Bob Hope, American comedian and actor (1903-2003)

Every December in Casa de Campo, as Christmas approached, a winter holiday spirit became evident.
Preparations were made for banquets, holidays decorations were brought out from storage, and there was a feeling of anticipation everywhere.

First the entrance to Casa would be decorated,

and a tree would be decorated in the main garden in the hotel.

Casa de Campo sent out a Christmas greeting card to everyone.

The front of the card had an original art work by Virgilio Mendez from 1989 titled, “Dama Criolla en Casa de Campo”.

I went to La Romana to look for Christmas cards, but they were hard to find. Eventually I found hand-made, silk-screened cards from eureka! that said, “Brum! Brum! vengo a desearte unas Felices Fiestas!!”

The children in this day care center were given Christmas presents.

Amazement and wonder were reflected on the children’s faces.

In 1992 the newspaper, Listin Diario, with Casa de Campo held a Children’s Drawing Contest. The children were to draw a picture of a house in the country (casa de campo).

The winner of this contest, Concurso Infantil de Dibujos, was Raquel Garcia, whose drawing graced the cover of the Holiday Program booklet.

In 1994, Nelson Garcia, designed the cover of the Casa de Campo Holiday Program.

At home, we decorated a Christmas tree, both inside the house —

and outside in the patio.

In the Plaza at Altos de Chavon there was always a Christmas table with a gingerbread house made by the Casa de Campo bakery.