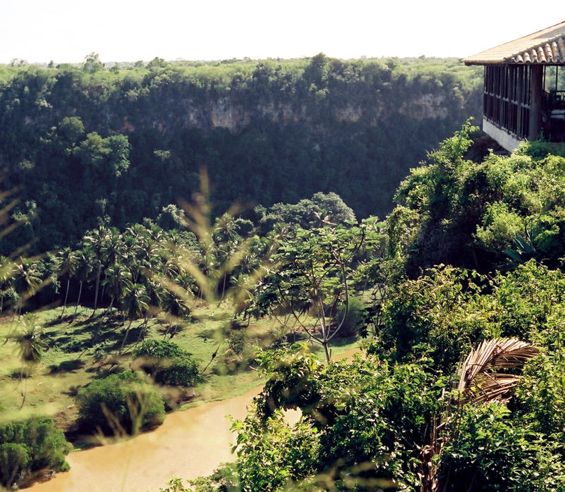 In this week’s memories of Casa de Campo post, Carol Burke our weekly writer brings us her memories of Altos de Chavón’s beautiful restaurant ‘Casa del Rio’ which is sadly no longer open, but the building remains perched on the cliff high above the Rio Chavon. (Although we have heard rumours that the building is to be reopened as a different restaurant!)

“There is no love sincerer than the love of food.”
— George Bernard Shaw

Casa de Campo’s fantastic restaurant, Casa del Rio, was always an adventure. Seated at a table, one could look directly down to the River Chavon.

Restaurant Casa del Rio is in a cantilevered building, suspended from the cliffs of Altos de Chavon.

On a Clear Day You Can See Forever

Chef Philippe Mongereau is a graduate of Mederic School in Paris, and has created great dishes at restaurants such as Ma Maison in Los Angeles, and La Maison Blanche in Paris.

This type of food is distinguished by its tropical adaptation of French cuisine. The emphasis is on cooking using olive oils with herbs and spices, home-grown fruits and vegetables, and fish and fowl.

The foods were exquisite, and captured the interest of Linda Platzer, one of the Beard Foundation’s program committee members, who happened to be visiting Casa de Campo at the time.

A few months later, the James Beard foundation invited Casa de Campo and Chef Mongereau to participate in one of their Special Events where each month a few of the famous restaurants of the world prepare a dinner for members and guests of the Foundation.

News from the Beard House, September 1991

Welcome to the Beard House

Every food lover in Casa de Campo was excited by this honor, and especially inspired were the three chefs who traveled to New York City to prepare the dinner in honor of Casa de Campo and Chef Mongereau’s Cuisine du Soleil.

Note:
to view the menus and recipes from this dinner, as well as the photos shown here, please copy this link and paste it into your browser: http://www.flickr.com/photos/dandelion-tree/sets/72157625733904712/

Casa del Rio has been celebrated in paintings by local Dominican artists,

and was one of the most extraordinary places in Casa de Campo in the early 1990s.