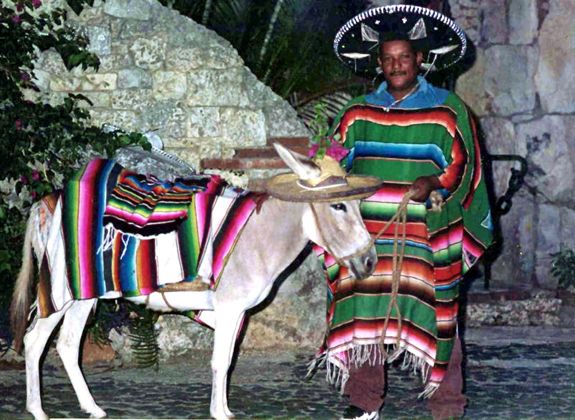 In this week’s ‘Memories of Casa de Campo post, our guest writer Carol Burke remembers the sights, sounds, people and animals of Altos de Chavon – some of which remain, while many have changed or moved on…

Altos de Chavon is one of the perfect places in the world. I lived there for six years and walked through the village almost everyday. The most memorable things about Altos were the white clouds in the blue sky floating by at eye level, and all the intricate stonework. My daily walks took me everywhere in Altos and it never got boring because there was always something new to discover.

Altos as a whole is a marvelous place. It is probably the only place in the world where donkeys wear hats, and where there are animals carved into the walls.

The apartments of Altos were above the shops. There was always merengue music lilting over the village from the open windows of the apartments.

There was a general store called El Mercadito which sold groceries and household items. The shelves were filled with every product you could possibly need.

In the aftenoons students could practice their piano lessons in the ZanziBar.

Next door to the ZanziBar you could see the tables being prepared for dinner in the restaurant Casa del Rio.

People often pretended that they caught the “big one” here.

He caught a big one!

Near the fountain, the amphitheater had a “wonder tree” growing on its wall. No one knew how it came to the wall without having any earth to grow its roots in, but there it was happily living on the wall.

Close-up of tree on amphitheater wall

If you stayed until nighttime, the Altos amphitheater might fill up with people, lights, and entertainment.

Lights and Colors in the Amphitheater

Any evening when you entered the El Sombrero restaurant in Altos, you were halted at the door by a large mustachioed man in a huge sombrero who handed you a shot of tequila, counted 1,2,3 – then ‘down the hatch’.El Sombrero Restaurant was a lively place with musicians and great Mexican cuisine. A donkey named Margarita always stood outside for the children to ride (top photo).

After dinner, the festivities might continue at Genesis discothèque.
The door was sometimes guarded by a large black cat.

Article and photos contributed by Carol Burke – THANKS Carol!