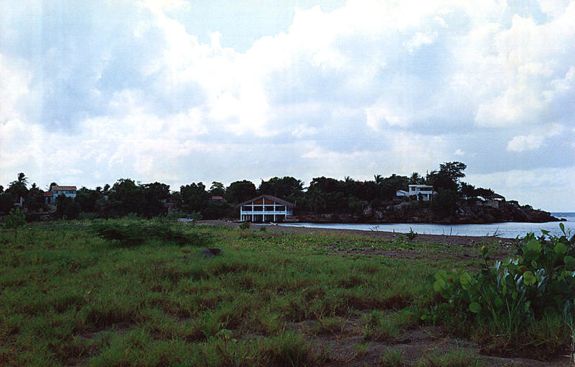 To accomplish great things, we must dream as well as act.

In the 1990s we could walk to the end of Punta Minitas and along a path to a hidden beach which ended at the mouth of the Chavon River.

From this sandy point we looked across the river to see an intriguing little village on the other side of the Chavon.

View of village from edge of Casa de Campo

We decided to visit this village one afternoon. We drove along the highway towards Higuey to where it crosses the Chavon River. There was a dam on the river here, and nearby was the side road to Boca Chavon Village. It was a bumpy unpaved road from where you could see the cliffs of Altos de Chavon.

Cliffs over the Chavon River – on the way to the village

We arrived after a long dusty journey. Boca Chavon Village has only a few streets. The houses were interesting to look at because they were so diverse. There were houses designed in a modern urban style,

and some houses were made of interwoven branches. This type of building technique has in use since Neolithic times. It is known as wattle, which is made by weaving thin branches between upright stakes.

A house constructed by the wattle and daub method

One house in the village used a variation of the wattle method to make a gate for their driveway. The huge chain which secures the gate seems out of proportion to the delicate branches of the gate’s structure.

Many of the village houses were small wooden homes surrounded by rocks and situated on the edge of the sea.

Little house by the sea

Some of the houses were larger and more modern, and the rocks surrounding them had been made into elaborate and luxurious walls.

Boca Chavon village was a quiet little place with only a few people walking around in the hot afternoon, and most of those people were children.

There was no restaurant open at the time we visited so we couldn’t get a drink, but we were able to see Casa de Campo in the distance across the river.

View across the river to the edge of Casa de Campo

The view from Boca Chavon at that time was all sand and sea with Casa de Campo in the distance. Since then Casa de Campo has created the marvelous Marina, Mall and Yacht Club on this location.