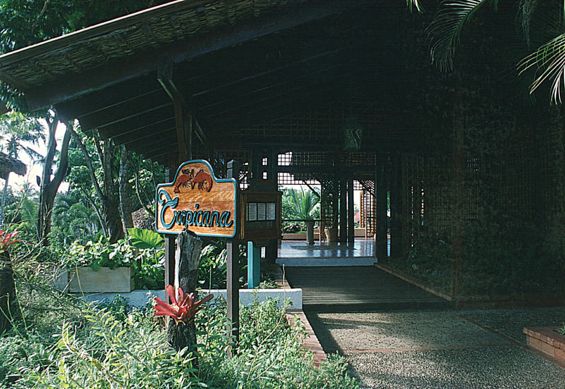 It’s Thanksgiving Week and in this week’s ‘Memories of Casa de Campo’ post our weekly writer Carol Burke brings us memories and photos of Thanksgiving in Casa de Campo – the perfect way to get us in the mood for this weekend’s celebrations!

“Heap high the board with plenteous cheer and gather to the feast,
And toast the sturdy Pilgrim band whose courage never ceased.”
— Alice Williams Brotherton (1848-1930) American author and poet

Tropicana Restaurant was Casa de Campo’s South Seas/Caribbean restaurant. It was located in the center of the hotel next to the Café El Patio, and Caña Bar.

From your table at Tropicana you would be just above the beautiful Casa de Campo pool.

Tropicana was open for dinner and food festivals. The restaurant was famous for the long dragon sculpture in the center. On regular days the dragon held the day’s seafood offerings, to be cooked to your order. On special occasions the dragon would hold the festival foods.

The Tropicana menu offered a fantastic selection of seafood, as well as some meat, poultry, side dishes and desserts.

During the time I lived in Casa de Campo, Tropicana was also the place to celebrate the holiday of Thanksgiving

A Thanksgiving festival has been celebrated throughout history as a harvest holiday – giving thanks for a successful gathering of produce.

The American Thanksgiving differs somewhat from the usual celebration of the harvest because it also celebrates the help the Pilgrims received from the Native Americans.

When the pilgrims escaped from England and came to America in the early seventeenth century they brought no survival skills with them.

They did not know how to hunt game nor that the winters would be so harsh. They had no weapons or warm clothes.

The native people taught them how to hunt and about growing New World food. Without the help of the Native Americans the pilgrims would have perished from hunger and cold.

To celebrate Thanksgiving, Tropicana Restaurant covered their famous dragon with burlap cloth and changed her into a sort of horse-like creature.

Then they surrounded the burlap horse with bountiful fruits and vegetables celebrating the harvest. Chefs created vegetable personages out of cabbage heads and squash.

Cabbages and Calabasas Make the Man

When the central Thanksgiving display was complete, Tropicana Restaurant looked like an upscale Farmer’s Market.

Across from the central table, there was a fabulous bread display against the wall.

The Casa de Campo bakery went all out in the variety and creativity of breads. They made every kind of bread imaginable.

Horns of Plenty – Breads with Cheese

A Loaf of Bread in Turtle Shape

There were beautifully decorated turkeys, hams, and roasts of beef.

Then there was the table where you could actually get some roasted turkey, beef or ham sliced onto your plate with cranberry sauce and gravy.

The Dessert table was overflowing with cakes, pies, and pastelitos of all kinds.

The chefs of Casa de Campo worked night and day to present an abundant feast for the guests.

Chef Antonio welcomes the guests to a Thanksgiving Feast