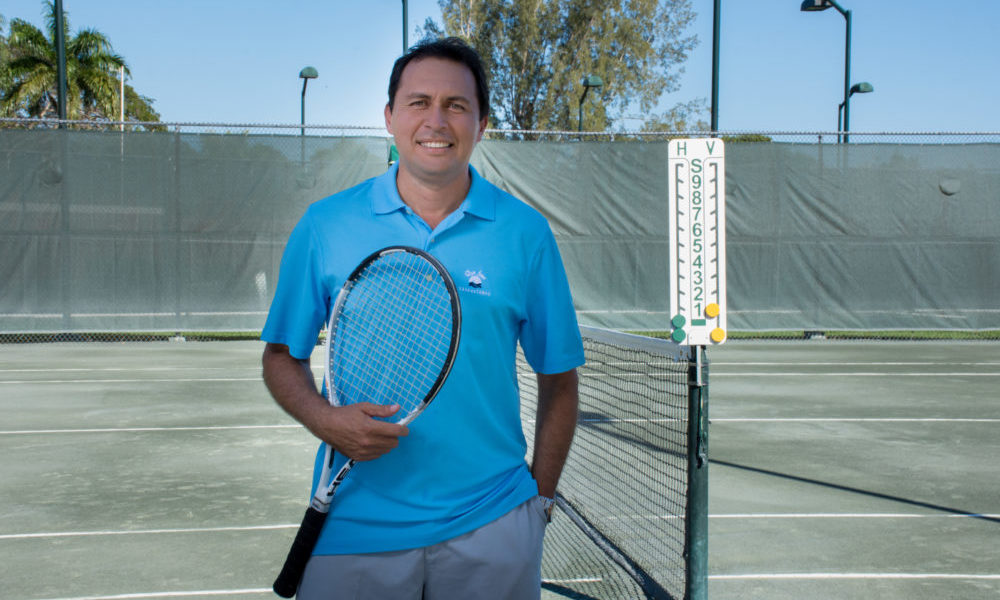 There’s something quite wonderful about getting out on the court and swinging a racquet — participating in a fierce doubles game with friends where you’re mindful of every detail and move — your tennis grip, your stance, following the ball precisely to see if it hits within the lines, constantly being aware of your partner’s position, and aiming your swing to the disadvantage of your opponents. Whether playing singles or doubles, it’s as much a mental game as it is a physical one, challenging your levels of endurance and concentration. For tennis enthusiasts, of any age, it also happens to be quite a phenomenal sport. Casa de Campo Living met up with the resort’s new tennis director, Matías Territoriale to learn how tennis became a central focus in his life and what’s to come for the tennis department this year.

From beginnings in junior tournaments and studying in France, Matías took up tennis coaching positions in his home country of Argentina and in Mexico before coming to the Dominican Republic last year. With quite the stack of qualifications as a pro-player, he’s certified by the International Tennis Federation, a part of the Mexican Tennis Federation from 2011-2016, and was a member of the Worldwide Conference of Tennis Coaches in Cancun in 2013. He also belongs to iCoach International Tennis Federation and enjoys devoting his unique skill set to seasoned players and beginners in Casa de Campo.

When did you first become interested in tennis and what players did you look up to?

When I was eight years old, I began watching tennis on TV and early on Ivan Lendl became an idol of mine. My friends and I formed a tennis group and began playing together. I also followed Andre Agassi and Roger Federer.

What was your favorite tournament that you played in?

The Copa Unicable Jujuy in Argentina 2005, because some of my friends also participated in it and it was close to home.

What do you think of the Dominican Republic in terms of tennis?

I think the country has a lot of potential; I would like to collaborate more with youth interested in the sport to develop their skills who can one day potentially represent the country internationally.

What is the best part about working in Casa de Campo?

It’s a company recognized worldwide; the excellent facilities all around with 13 Har-Tru tennis courts, plus a bar and a pool make this a very complete and attractive resort for tennis players, vacationers, and sports fans. In all the clubs I have been at all around the world, the Casa de Campo Tennis Center are unique and have a great potential for the development of high level tournaments and tourist events.

What upcoming things can expect from the tennis department this year?

We are planning to introduce tournaments for villa owners, guests, and external participants under the name of the Casa de Campo Tennis Center. We are also concentrating on the children and teens academy, improving the skills of the pros and players, and the optimization of the tennis shop for purchasing apparel and merchandise locally.

What may be the most challenging aspect to mastering the game?

In modern tennis, one of the most important aspects of the game is consistency or game volume. To enhance this aspect, besides the technical and tactical work, an emphasis must be placed on physical work and flexibility.

Is there a common mistake tennis players make that needs correcting?

One of the most common mistakes at the amateur level is the anxiety of looking for the point. To correct that, we work on long rallies to fortify patience and waiting for the right moment to define the point.

Who are great tennis players to watch this year?

Alexander Zverev from Germany, because in spite of his young age, he’s got very impressive results in the ATP Tour.

I enjoy all sports in general, along with the cinema, good food, music and of course, travel.

For more information on the Casa de Campo Tennis Department, to sign up for membership, lessons, or court reservations call: 809-523-5940. The tennis facilities are open everyday from 7:00 a.m.-9:00 p.m.