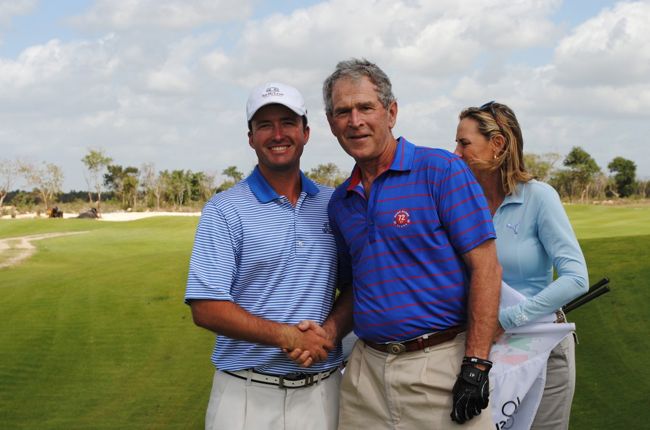 In just over a year and a half, Eric Lillibridge, the Director of Instruction at the Jim McLean Golf School has fallen in love with the Casa de Campo resort, become a popular member of the Casa de Campo community and played golf with some rather famous faces, such as Former President George W Bush! So in order to “get to know” Eric a little better, here we bring you an interview with him.

@cdcliving: How did you first hear about Casa de Campo?

Eric Lillibridge: Well I had heard about the golf being incredible years ago. I had always wanted to come and play the Teeth of the Dog because many of my golf friends had played the courses here and they all raved about how great they were. I am also a huge fan of Pete Dye golf course design, and to have 90 holes in one resort that he designed is incredible.

@cdcliving: Can you tell us a little history about yourself?

Eric Lillibridge: I have been working for the Jim McLean Golf School at Casa de Campo since November 2010 (a year and half).  I am from Napa California, and my passion for golf started at a very young age. My Mom and Dad cut down an old golf club of theirs, and from the time I started walking I was carrying that club around – I can’t tell you how many dents I put in the furniture legs!!!

My passion for the game of golf grew and grew. When I was a teenager I was nationally ranked, which allowed me to accept a Golf Scholarship to Santa Clara University. After four years of College golf, I decided to take my game to the next level and turn Professional. Boy was that an eye opener!!! Needless to say, after about a half of a year of getting my butt kicked, I decided to take a position as a teaching assistant to Jim McLean. I spent 5 years teaching at the Jim McLean Golf School in Miami at Doral. Then I received a phone call from Gilles Gagnon asking if I would like to bring the Jim McLean name to Casa de Campo.

Knowing a little history about Casa de Campo already….all the Pete Dye courses…..I was on the next flight here, and the rest is history. I absolutely love working here at Casa de Campo, the people are great, I stay busy, and it’s also pretty cool learning another language.

Eric with one of his students in Casa de Campo

@cdcliving: What is your role within the Casa de Campo Golf Department?

Eric Lillibridge: I am the Director of Instruction for the Jim McLean Golf School at Casa de Campo (kind of a long title I guess). But in short, I teach golf and I help out Gilles Gagnon and Dave Pfisterer with daily operations when I am not teaching.

@cdcliving: When you are not on the golf courses or working in Casa de Campo Golf… what does Eric Lillibridge do in his free time?

As a golfer, Eric Lillibridge boasts the following credentials:

Playing Credentials:
• Played 4 competitive years of golf as a Bronco at Santa Clara University
• Served two years as the Broncos team Captain
• Named WCC All-Team in 2004 and 2005
• Received WCC Honors in 2006
• Best collegiate finish was tied for 2nd while shooting -9 at the Purple and Red Invitational in Utah
• As a Bronco he had two Top-5 finishes, ten Top-10 finishes, and over fifteen Top-20 finishes
• Qualified for the United States Amateur in 2005
• Finished Runner-up in the California Match Play Championship
• Was Top 10 in points for the Northern California Golf Association in 2004, 2005, and 2006

After graduating from Santa Clara University in 2007, Eric joined the Jim McLean staff in Miami, Florida to pursue a career in teaching golf.