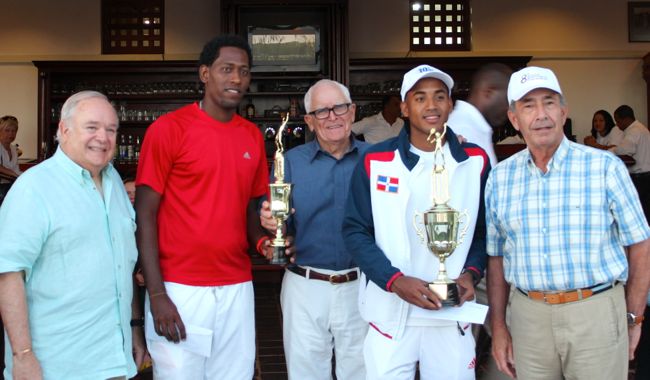 While polo may be Casa de Campo’s #1 spectator sport, there is one time a year when the Casa de Campo community turns out in force to watch another sport… and that’s during the annual McDaniel Tennis Tournament.

This past Sunday March 15th, the annual McDaniel Tennis Tournament came to an exciting close with the finals played at the La Romana Country Club. In the finals was Pedro Nolasco, reigning champion who has now won 5 times in the tournament’s 10 year history, who went up against Edwin Guerrero, undoubtedly the crowd favorite. Nevertheless Pedro triumphed once again and the gathered Casa de Campo crowd was treated to an impressive and exciting afternoon of tennis.

Following the end of the match, the tournament’s sponsors, players, ball boys and their families were invited to the prize giving also celebrated at the La Romana Country Club.

This year celebrating its 10th anniversary, the tournament raised an impressive sum of US$65,000, far surpassing the fundraising goal set by Rick McDaniel, the tournament founder whose aim has been to not only create a tournament for our amusement and to give the ball boys and teaching pros essential tournament experience, but also to provide them with an education.

Thanks to the unfailing generosity and support of the Casa de Campo community, the foundation now provides scholarships for more than 20 ball boys, as well as medical and dental insurance. In addition the foundation is now thrilled to be able to offer their first college scholarship which will send Andy to the USA to study in 2016, as well as a mentoring program which pairs more experienced players with younger ones in order to help coach them to improve their tennis game, while also giving them positive role models for life.

“Thanks to you they will have a more successful and happy life” said Rick McDaniel founder of the McDaniel Tennis Tournament, who in addition to thanking all the tournaments supporters and sponsors also gave special thanks to Alfonso Paniagua, Johnny Fanjul, Ramon “Papo” Menendez, Rafael Torres, and their 3 lead sponsors; Casa de Campo, Charles Schwab and the Hank & Laurel Greer Foundation.

Also honored was Emilio Vásquez, this year’s honorary chairman who was presented with a plaque engraved with “Mr Tennis”, who as Rick said has dedicated his life to the progress of tennis in Casa de Campo and indeed the entire Dominican Republic.

Following the prize-giving ceremony, the ball boys, players and Emilio surprised Rick McDaniel by awarding him with a much-deserved plaque in thanks for his commitment to the tournament and the welfare of the players and ball boys.

The following collection of images by Fernando Grullon were taken during the finals of the 10th annual McDaniel Tennis Tournament in Casa de Campo: