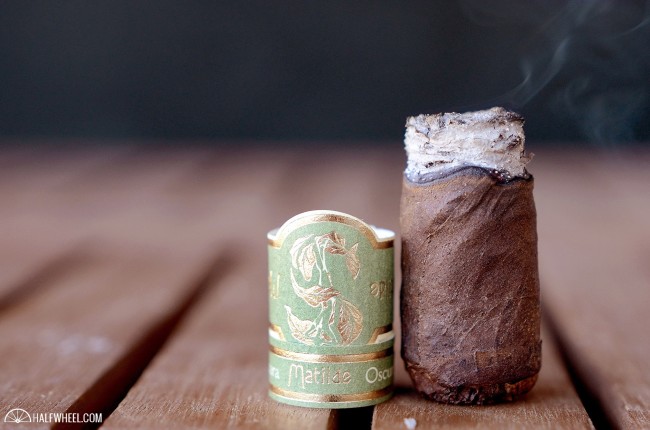 In 2013, Jose A. Seijas, former master blender of Tabacalera de Garcia, announced the launch of his new brand, Matilde. By focusing on limited production, it gave him the opportunity to work with a wider variety of tobacco blends. Matilde prides itself in applying strict quality controls and working with cigars that are entirely handmade and aged to perfection. Jose, with his two sons Enrique and Ricardo, were inspired to create a memorable brand.

The first Matilde line, Renacer is the product created with 40 years of experience and what Jose called his best work so far. “Renacer” means rebirth, which Jose believed was a perfect name for the first Matilde line: “It represents the rebirth of Matilde, an old Dominican brand, and my new stage in blending and manufacturing,” he said.

Matilde Renacer comes in four sizes: Corona (5 1/2 x 44), Robusto (5 1/4 x 54), Toro Bravo (6 1/2 x 54), and Grande (6 x 60).  With strong grassiness to the flavor profile, along with an undercurrent of earth and creamy coffee it received great reviews. Matilde Renacer is being referred to as the strongest, fullest Dominican smokes in a very long time.

For 2015, Matilde went dark with Matilde Oscura, getting its name and color from the San Andrean wrapper, a much different look and effect than the Matilde Renacer, which has a Habano wrapper. Matilde Oscura comes in three sizes Corona, Robusto, and Toro Bravo. With notes of black and white pepper and just a hint of sweetness, it has a different flavor profile from its older sibling and makes a very nice addition to Matilde family.

The Halfweel, one of the most influential awards in the industry, has awarded both of the lines. Matilde Oscura ranked #8 in Halfweel’s Top 10 Consensus Awards and Matilde Renacer Corona is #18 on Halfweel’s Top 25 list. #2 in the Top 25 list fell to another well-known Dominican cigar, La Flor Dominicana La Nox by Tabacalera La Flor, and in the #6 spot came the Davidoff Limited Edition Year of the Monkey. Given Davidoff’s upcoming Art and Gourmet Weekend in Casa de Campo in February, you might be able to try it if you attend! What a year for Dominican Cigars!

Matilde made almost all of the lists of best cigars, scoring a minimum 91 out 100 points. The blogs praised the flavor profiles of both lines, and here are some of the awards: Matilde Oscura Toro Bravo rang in #1 on Seth’s Humidor, Matilde Oscura Torro ranked #5 in Toasted Foot’s Top 10 cigars of the year, and the Matilde Renacer #8 in IRobusto’s Top 10. Click the links to read the reviews.

Personally for me, Matilde Renacer was one of the first and definitely a favorite of the Dominican Cigars I tried before I even thought of moving to Dominican Republic. A truly Dominican cigar!