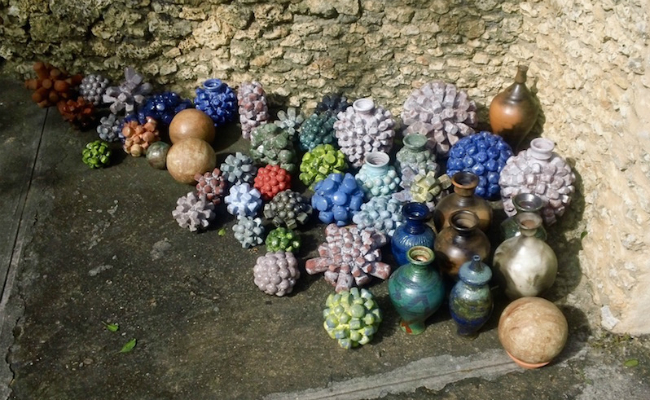 After a 35 year absence from The Gallery at Altos de Chavón, Mark Gordon is back presenting his most recent work. On Tuesday February 23rd, we were excited to be part of the opening of his come-back exhibition at La Galeria’s second floor.

Mark Gordon, Associate Professor of Art and Design at Barton College in Wilson, North Carolina received degrees in Philosophy and Physical Education from Oberlin College in Ohio; and his MFA in Studio Art is from Ohio State University. He has worked in clay for over 40 years, beginning with wheel throwing, and expanding into modular assembled clay sculptures and mixed-media site-specific installations. His work is exhibited in regional, national, and international galleries, colleges and universities, and museums.  Mark has also been a Fulbright Lecturer at the Facultad de Artes, Universidad Nacional in Oberá, Argentina back in 1991.

Mark with Damaris Castaños at the first Altos de Chavon Pottery Workshop graduation in 1982. Damaris has run the pottery workshop since Mark left in 1983 – and I am also proud to call her MY MOM!

His work has been featured on the cover of Pottery Making Illustrated magazine with “Pushing the Envelope” which talks about his process of wet/dry clay assembly.  He was featured in a career profile interview, and images of his artwork were included in the Davis Publications textbook Experience Clay by Maureen Mackey. You can find his work publications in American Ceramics, Ceramics Monthly, The New York Times, American Craft,  Clay Times: The Journal of Ceramic Trends and Technique, Revista Internacional Cerámica [Spain], and Ceramics: Art and Perception [Australia].

Mark is one of the original “Chavoneros”. He first came to La Romana in December 1980 thanks to Dominique Bluhdorn and Stephen Kaplan to train a group of locals in ceramics and open a workshop here in Altos de Chavon. He was assisted by Damar Castaños who has run the workshop since he left. They trained a total of three groups; wherein only a few still work in ceramics. Magdiel Taveras, is currently a pastor and teaches on Sundays, and Jose Tiburcio continues to work in the workshop. Mark spent a long time here and loves this country very much; he even speaks Spanish “aplatanao,” meaning he uses most, if not all, of our very own colloquialisms and slang.

During this most recent trip, he worked on pieces using different techniques to “cook” ceramic, such as smoke, raku and different glazes – which by the way are spectacular pieces. A great addition to any space in your home or office, and will captivate the attention of anyone who visits. He also prepared a 2 hour workshop with the students of the Altos de Chavón School of Design, and various lectures in La Galeria and the classrooms.

Mark has left to Santo Domingo, where he will be staying a month in La Zona Colonial giving lectures, and from there on to Santiago, where he was invited by Centro Leon.

Even though he is not currently in La Romana, you still have the chance to visit his art exhibit on the second floor of La Galeria. It will be on display until March 15th.

Do not miss the chance to see his incredible artwork, and don’t pass up the opportunity to take one home with you! We all fell in love with his pieces, and they will be a unique addition to your home. To learn more about him and see his previous work, visit www.markgordon.com.