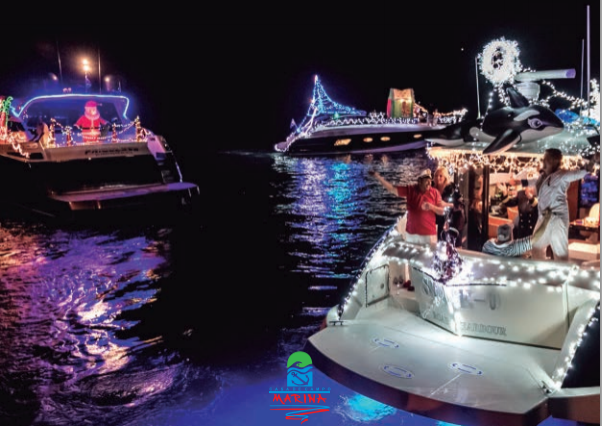 This year the Marina Casa de Campo continues the magical holiday tradition of the “Christmas Boat Parade”, once again sponsored by the IBC Shipyard.

Beginning at 6:30pm on Friday the 26th of December the Christmas Boat Parade will be a magical show of lights, Christmas decorations and music, which will bring the Marina Casa de Campo alive with Christmas spirit and cheer!

The parade will lead around the Marina Casa de Campo with the main viewing area located at the end of the Paseo del Mar, at the “Victory plaza”.

Casa de Campo villa owners, visitors and residents are all invited to relax and enjoy not only a stunning sunset, but also the parade of Christmas boats as they float by!

Who can take part in the boat parade?

All boats up to 70ft in length, from kayaks to motoryachts are welcome to take part! Let your creative holiday spirit go wild! Please contact the Marina Casa de Campo (809) 523-2500 / 2247 to arrange your participation in advance.

There will be a range of prizes for the boats and crews that take part!

Click here to view our photos and coverage of last year’s boat parade.

Where: At the end of the Paseo del Mar, on the “Plaza Victory”, in the Marina Casa de Campo

Floating out of the darkness appeared the yachts, decked out with lights from bow to stern and glowing like Santas sleighs in the nighttime sky.

While each yacht had a glittering abundance of lights in common, each one had their own individual touches….

Click here to view our photos and coverage of last year’s boat parade.