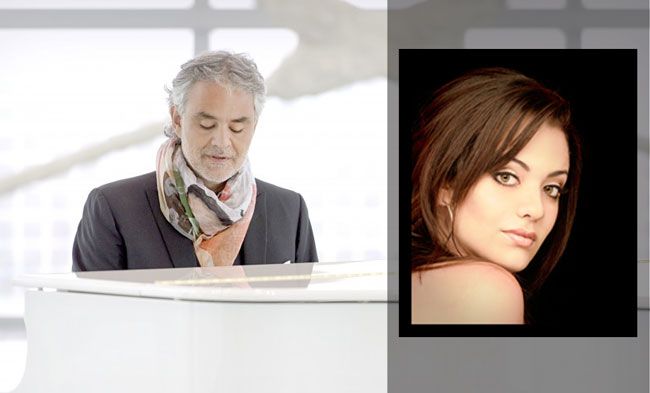 And the good news just keeps on coming! With just a few days left until the great master Andrea Bocelli himself will step out at the famous Altos de Chavón amphitheater, we’re thrilled to announce that Cuban soprano Maria Aleida will be accompanying him for what will undoubtedly be an epic night.

Maria Aleida is a famous Cuban soprano with a voice, which led her in 2008 to be the winner of the international competition “Voz de Monserrat Caballe” held in Zaragoza, Spain and this Saturday April 4th she will be bringing the performances that made her famous in prestigious scenarios such as the Festival della Valle Martina Franca d`Itria and di Pesaro Rossini Opera Festival, to the the stones of Altos de Chavón.

Having recently performed at the Altos de Chavón amphitheater in 2009, Andrea Bocelli has promised a completely different show, with a full repertoire of his performances in Spanish.

As has become a tradition in his presentations, Bocelli will feature the musical direction of the Master Carlo Bernini, who acted with him in numerous concerts around the world, as a pianist and conductor.

On this occasion, the event will benefit the Fundación MIR and Hogar del Niño, both charities focused on education based in La Romana.

Casa de Campo also recently announced that the Dominican Maridalia Hernández will open the show, while the musical accompaniment will be done by the Molina Philharmonic Orchestra, conducted by master José Antonio Molina as the guest conductor.

The official prices of the tickets are: US$107 General tickets, VIP US$265  and US$717 Front Stage. Tickets are already on sale in Casa de Campo at the Casa de Campo Villa Owners Club, as well as at the Fundación MIR offices in Altos de Chavón and from the Hogar del Niño in La Romana. Tickets are also available at www.uepatickets.com and their entire network, Movie Max, CCN, Supermercados Nacional, Jumbo, Claro Clients Care Centres of the Corporate Building and Blue Mall (with 10% discount for Claro and Casa de Campo customers).