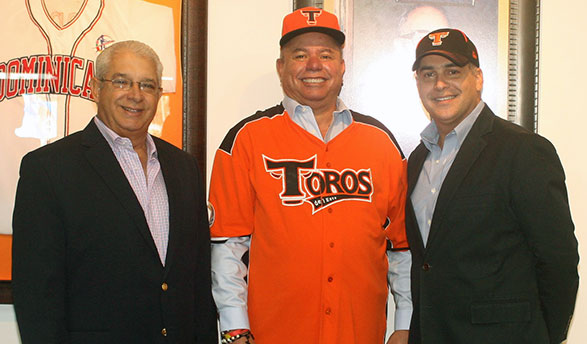 Los Toros del Este have decided to put into practice this famous proverb that says, “the early bird catches the worm”, and have already announced the Dominican Felix Fermin as the new manager of the team – only a few weeks after the end of the Dominican Baseball Winter League.

The announcement was made by the board of directors of the team, Luis Rodriguez Amiama and Pablo Peguero at the offices of the Francisco A. Micheli Stadium in La Romana.

“For the Toros del Este it is a great achievement to integrate Félix Fermín, recognized as the most successful manager in the history of Dominican baseball, and who we now have commanding our troops in the Francisco A. Micheli Stadium” said Luis Rodríguez Amiama.

On the other hand Félix Fermín said that he comes to the Toros team to win. “That’s the expectation that I have. I have come to an organization with great capability, and I am very confident in what we would do with the Toros. I’m not a manager to begin in October, I start now as we’ll be watching the roster of players to start structuring “

With this new manager and other changes ahead, we look forward to seeing our Toros del Este win their third title!