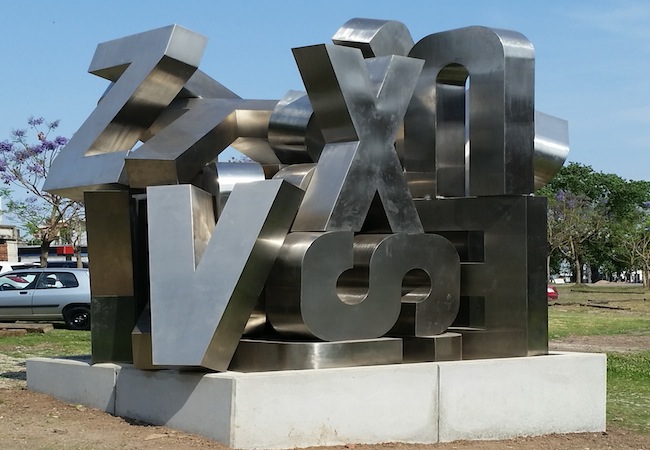 Leopoldo Maler, who was once upon a time the dean of studies at the Altos de Chavón School of design, is also a rather famous and successful artist, and recently unveiled a magnificent 3.5ton metal monument in Buenos Aires.

Leopoldo is also now the director of the post graduate course on Advanced Design at the UNSAM (Universidad Nacional de San Martín) in Buenos Aires, as well as being the very proud father of David Maler, Casa de Campo’s own movie star, who we recently saw in Código Paz starring alongside his movie star wife, Nashla Bogaert.

So what about this remarkable monument?

Standing proud at the entrance of the UNSAM university campus, ALPHA MATER was commissioned by the president of the UNSAM (Universidad Nacional de San Martín) in Buenos Aires, on the advice of a group of prominent Argentine art critics.

“The 26 letters not only allow represent the knowledge, poetry, memory and wisdom of mankind. But once blown up into giant size, the letters somehow lose their inherent form and turn themselves into most beautiful shapes and figures.” Leopoldo Maler told Casa de Campo Living.

Leopoldo Maler is most famous for his installations and sculptures, but how did he create something on such an enormous scale?

“Firstly I made sketches, then prepared a scale model which I took to a great metal craftsman in Buenos Aires. The letters were later built in 2mm thick inox steel with internal pipe reinforcement. The full piece is almost 6 meters high and the weight of the monument is of 3.5 tons.” Explained Maler.

Leopoldo was born in Argentina and studied Law in Buenos Aires, before moving to London for 18 years, where he worked for the BBC, created installations, sculptures and incorporated them into films as well as creating performances for many of London’s theatres, and exhibited his work all over the world from Centro Pompidou in Paris to the Centre for Interamerican Relations in New York. In 1977 he was granted the Guggenheim Fellowship for Arts and in 1983 moved to Casa de Campo to be the first dean of studies for the Altos de Chavón school of design. In 1988 he co-founded the Napa Contemporary Arts Foundation. His works can be found in major museums and private collections across Latin America and Europe. Leopoldo continues to create new pieces, from his home across the river from Casa de Campo, many of the pieces you will see in these photos are of his most recent pieces.

This is only a VERY brief summary of Leopoldo, to read more about Leopoldo and see a more complete collection of photos of his works, please click here to visit his website.

Also click here for a glimpse inside Leopoldo’s home / art gallery, located across the river from the Marina Casa de Campo.