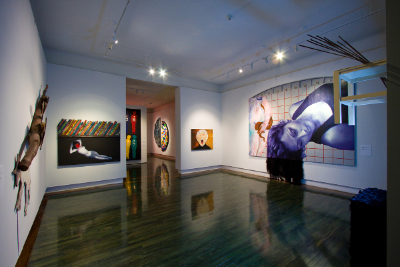 The exhibit called ‘OTRAS INTOXICACIONES’ will be on view at the Puerto Rico Museum of Contemporary Art until the 20th of September. Curated by Marianne Ramírez Aponte, the exhibition features seminal pieces in the artist’s development, including performance, installations and pictorial work, executed from 1971 to the present.

“Everything that I do isn’t to make the viewers react, but, on the contrary, to make them sit and reflect. As passively as possible. A viewer who contemplates, in a situation of contemplation similar to that which you find when you go to a temple.”
– Leopoldo Maler

On display will be other forms of conceptual expressions that have defined Maler’s prodigious career – installations and street actions. Among the six mesmerizing works re-created in the exhibition is Metrobolismo, a project executed in 2005 in the city of San Juan, Puerto Rico. For this project, Maler presented an urban choreography of white, red, and yellow vehicles. While a local radio station transmitted instructions on the precise movement of the cars, TV camera teams onboard a helicopter documented the event and broadcasted it live. The playful proposal is sought as a visual metaphor of urban metabolism.

In Primer Testimonio, 1974, another highlight of the exhibition, Malerpresents an editorial room filled withold Underwood typewriters that utter flames in the place of words. With this political piece, the artist pays homage to his uncle, who practiced journalism and “disappeared” during the military dictatorship in Argentina.

In addition to these experimental pieces, the exhibition presents a selection of complex mixed media assemblages, often characterized by their inventiveness and use of simple and everyday materials.

Born in Argentina, Maler moved to London in 1961, where he started to experiment with his new ideas about mixed media, integrating films into sculptures and installations. In 1977 he was granted a Guggenheim fellowship and moved to New York. Maler has represented Argentina in the XIV International Biennial of Sao Paulo – where he received the First Grand Prix – and in the 1986 Venice Biennale. He has exhibited extensively throughout the world, including the Centre George Pompidou, Paris; Hayward Galleries, London; Palazzo Grassi, Venice; and Hara Museum, Tokyo. His works are in major museums worldwide.