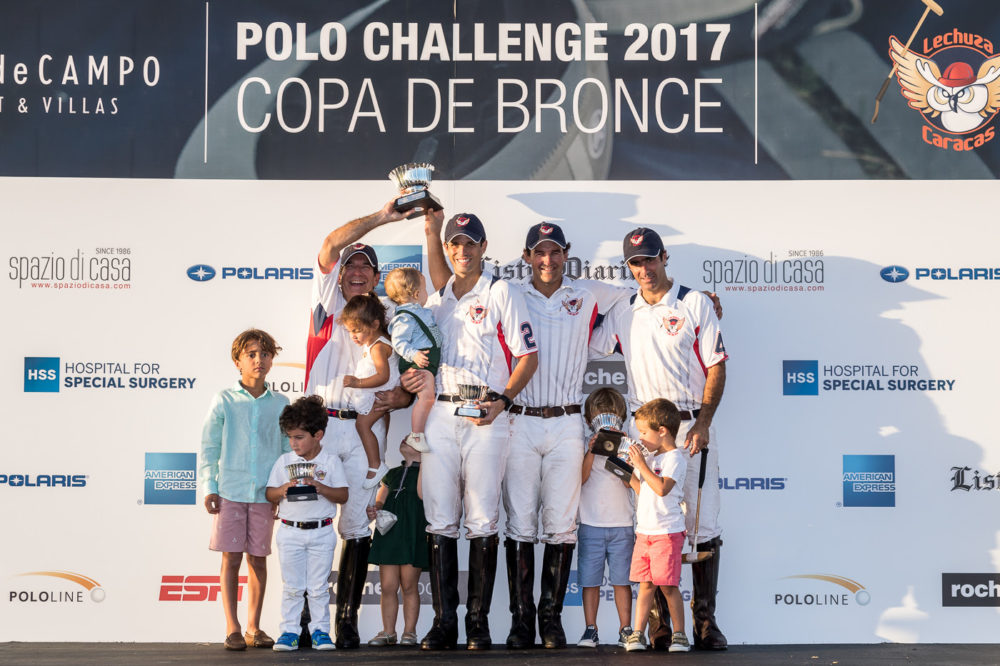 On Sunday the finals of the Bronze Cup, the first tournament of the Polo Challenge 2017 took place in Casa de Campo. Lechuza Caracas, the defending champion, encountered a great opponent in Alegría-El Milagro, but after a tough fight, managed to keep the Cup for the second consecutive year.
Before the big game, the day started with a match belonging to the 12-goal category, between La Potranca and Costasur. This was the second win for La Potranca and actually the third defeat for their opponents, and the game ended in 10-7.

The game began at 4:00 pm, on the field number two of Casa de Campo, after the chorus of Hogar del Niño sung the National Anthem. Later on, in Casa de Campo, the most awaited moment arrived: the finals between Lechuza Caracas and Alegría-El Milagro. Lechuza had a tough start, compared to other matches: throughout three chukkas, Alegría managed to keep the scoreboard tied. Both Julian Mannix and Cubi Toccalino performed excellently and were able to give Lechuza a run for its money, while Pelón Stirling was living up to his reputation and handicap. After the third chukka, Lechuza understood it was necessary to give the game a twist, and made a huge difference with some great horse changes, and took the absolute lead helped by an incredible performance by Juanma Nero. The final score was 9-6 and the Venezuelan team managed to keep the cup they had won in 2016.

The activity was attended by various guests, both from the community of Casa de Campo, and from other parts of the country. One of the most memorable moments of the Bronze Cup final was the artistic presentation of the ESPN hostess Martina Monteverde, who is also the wife of Fernando Arata, Polo director of Casa de Campo. Monteverde delighted those present with some Jazz songs.Another pleasant surprise was also the participation of the group “Solo Por Hoy” (Just for today), formed by the young Pia Martelli, Azul Martelli, Martina Ferrari, Lucia Ferrari and Bautista Araya. The group formed by the children of the tournament players, captivated the audience with live performances of Latin music. The audience danced and sango to the popular songs “La Bicicleta” by Carlos Vives and Shakira; “Caraluna”, by Bacilos; “La Gozadera”, by Gente de Zona; “El Muelle de San Blas” by Maná; among other songs.

Next weekend will mark the start of the Silver Cup, that’s already looking really promising.

See below pictures taken by Mairobi Herrera during the finals on Sunday January 29th: