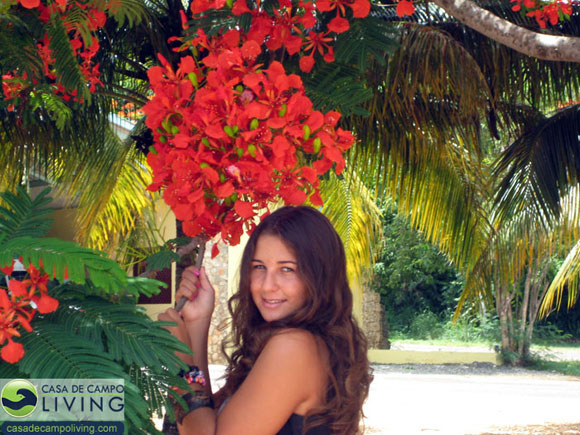 Have you noticed? They have dressed up in their best finery, mostly in fiery shades of orange and red, and playfully dance in the wind to their own magic tunes, majestically and flirtatious at the same time, like coquettes. But they are rather faithful girls, the lot of them – they actually put the same colorful spectacle on scene for us each year from May to September.

Who are these striking ladies in red? Where do they come from? Take a drive around and you will find them gracefully adorning gardens, villa entrances, landscapes and bordering roads everywhere throughout the Casa de Campo resort. They are part of Casa de Campo’s incomparable troupe of beautiful Flamboyant trees. We just can’t have enough of them.

Surprisingly, the Delonix Regia is a species of flowering plant from the Fabaceae family, endemic to Madagascar. Philippe de Longvilliers de Poincy, credited with introducing the plant to the Americas, is the guy we need to thank for this veritable feast to the eyes we enjoy each summer.

Noted for its fern-like leaves and flamboyant display of flowers (hence, the popular name) it requires tropical or near-tropical climate, but can also thrive in drought and salty conditions. It is also widely grown in India, Africa, Hong Kong, the Canary Islands, Taiwan, and southern parts of China and Brazil. It is the city tree of Tainan, Taiwan and Siamen, Fujian Province, People’s Republic of China. The National Cheng Kung University in Tainan displays one on its emblem.

In the United States, it grows only in South and Southwest Florida, the Rio Grande Valley of South Texas, ranging from the low deserts of Southern Arizona (to as high as Tucson), Southern California, Hawaii, Puerto Rico, U.S. Virgin Islands, Guam and the Commonwealth of the Northern Mariana Islands, where it is the official tree of the islands.

In the Caribbean, it is a particularly admired and pampered tree. The Poinciana is also the national flower of St. Kitts and Nevis. It grows in Cuba, Puerto Rico, Guatemala and Mexico. La Vega, in the Dominican Republic, is known as the City of the Flamboyants.

Depending on where in the world you find it, the Flamboyant is also known by different, exotic names: Gulmohar or Gul Mohr in India, and Krishnachura in West Bengal and Bangladesh. In Vietnam, it is known as Phoenix Tail but also — and I particularly like this allegory — because the flowering season is April-May, coinciding with the end of the school year, it is sometimes called “flower of pupil”, evoking strong emotions upon graduate high school students who relate to the Poinciana’s blooms as the time when they leave school and their childhood behind.

The Flamboyant tree’s vivid flowers in tones of red, vermilion, and orange flowers against bright green foliage make it an exceptional sight. The naturally occurring variety flavida has brilliant yellow flowers and is no less extraordinary. In addition to its highly appreciated ornamental value, it is also a useful shade tree in tropical conditions, because it usually grows to a modest height, typically around 5 mts though it can reach as high as 12 mts, but spreads widely, and its dense foliage provides full shade. In areas with a marked dry season, it sheds its leaves during the drought, but in other areas it is virtually evergreen.

The flowers are large, with four spreading petals and a fifth upright petal called the standard, which is slightly larger and spotted with yellow and white. Seed pods, which start to appear towards the end of the flowering season, are dark brown and can be up to 60 cm long and 5 cm wide.

So many painters have fallen madly in love with these alluring ladies, but like so many muses of present and past times, it’s like trying to paint a rainbow….you never quite get to capture their beauty on canvas. Likewise, through the years, poets have tried to express their awe in countless romantic, exquisite verses. Under their flowering branches, they have hosted countless serenatas, and silently abetted lover’s encounters and first kisses.

In Casa de Campo, they thrive marvelously. Some of them are blooming for the first time in a riot of colors; some are practically showing the exuberance of teenage years, while others, grand dames of many summers, generously spread their arms and delight us with their rich, proud blossoms, and fresh shade. Do take the time to look around, enjoy the sight and join their fan club. Feel free to tell the “girls” a few nice piropos. No doubt, they seem to adore all the flattering looks and praise because, sure enough, they keep coming back each year for more

Did you know? The seed pods of the Royal Poincianas are used in the Caribbean as a percussion instrument known as the shak-shak or maraca.

In Spanish, seed pods are called “vainas”, and if you are Dominican or have lived here for sometime, you will easily recognize the world as a colloquial expression meaning “problems, difficulties”. A very popular local saying jokingly compares marriage to the Flamboyant tree, “first the flowers, and then the “vainas”…!