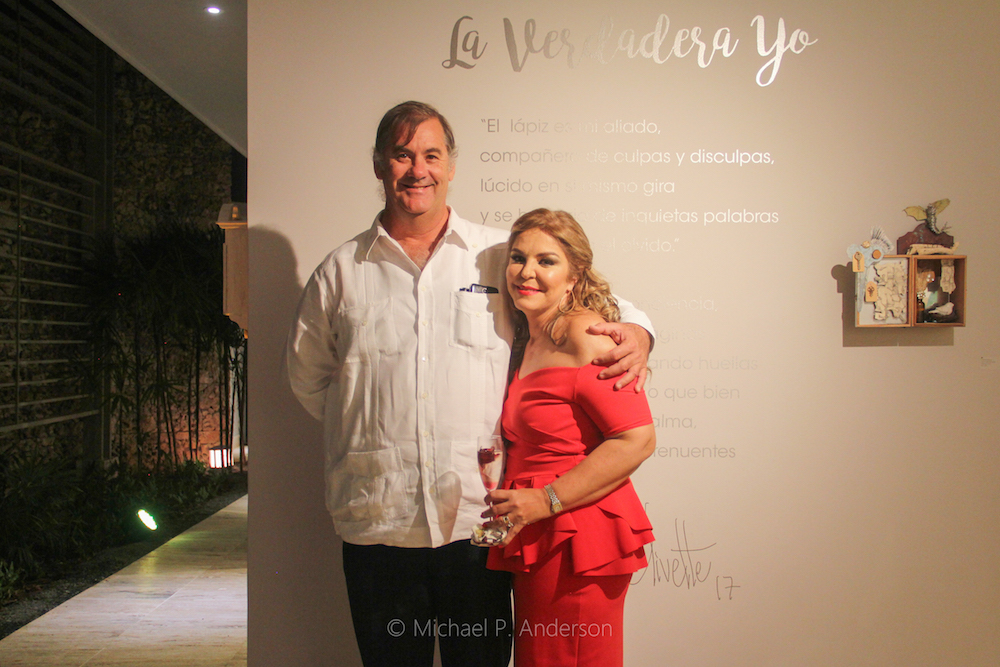 On December 21st, Eddy Guzman presented the exhibition “La Verdadera Yo” (The real me) inspired by the book written by the Dominican artist Olivette Santoni. The artist prepared a collection of drawings, paintings, and altarpieces to illustrate the poems that make up her book of poetry and drawings named in the same way, “La Verdadera Yo”. This book, rather than a biography, is a portrait of the different aspects of her feelings as a woman and her need to create. With great poetic force through drawing and collage, Santoni explains that her artwork is the engine of life that moves her whole universe.

“The pencil is my ally, companion of guilt and apology, it twirls and makes a river, of restless words that dodge oblivion. Silent voice of conscience which rumbles on the pages it traces, pointing out prints that emulate figures or could well be narrating the cries of the soul, of dreams reluctant to disappear. A small chrysalis that shakes all chimeras. Let’s say that all my thoughts lie summarized in its gentle wooden heart, but it’s just next to my terrors that it renews the nest.” – Santoni, Olivette. (2017) Lápiz, La Verdadera Yo (Pág. 45) Santo Domingo: Alfa y Omega Ediciones.

The opening took place in Barranca # 17 in Casa de Campo, La Romana, accompanied by a sophisticated cocktail. The art pieces had also been exhibited at the Don Emilio Rodriguez Demorizi in Mamey Gallery by Eddy Guzman, Santo Domingo, from December 7th-10th, along with the release of her book. “La Verdadera Yo” will be open to the public in Barranca # 17, until January 7th, 2018, every day from 10 am- 7 pm. Before the exhibition, the book was masterfully presented by Mr. Laureano Guerrero; who spoke about the different aspects of Olivette’s life pointing out that it has never steered far from her artwork. He also analyzed the poem “Los Cincuenta de Guillermo” (p. 14). The ceremony was organized by Mr. Isael Pérez president of the Editorial Santuario.

* Information and pictures below courtesy of Eddy Guzmán

Ana Maria Olivette Santoni Bisonó, “Malele,” is a painter and designer born in Santo Domingo, Dominican Republic. In 1981, she joined the School of Fine Arts Candido Bido. Received her BA in Design and Interior Decoration in UNPHU, Santo Domingo, and decided to study fine arts in 1987. She graduated from the Altos de Chavon School of Art and Design in Fine Arts and Illustration.