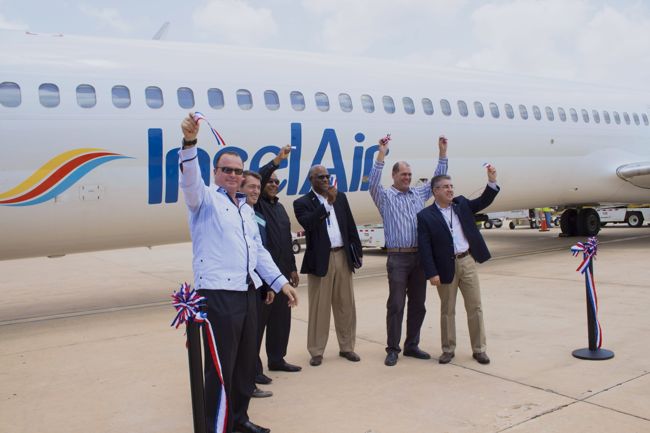 In typically colorful Dominican style, the new flight was welcomed not only by a water salute, but also by a Dominican Perico Ripao band and dancers wearing traditional Dominican costumes.

As the InselAir flight landed on the Casa de Campo – La Romana tarmac for the first time it was greeted by a round of applause led by and enthusiastic Gustavo De Hostos, representative of InselAir in the Dominican Republic, who was joined by the press and VIPs from the Casa de Campo hotel; Peter Bonell, chief marketing officer and Daniel Hernandez, general manager of the hotel; as well as Ana García, executive director of the La Romana – Bayahibe tourism cluster.

“We are very very happy to see this new flight in our airport and we hope that this is the beginning of a long and successful relationship, between not just InselAir and La Romana airport but between two cities and two countries,” commented Andres Fernández, Commercial, Airport & Port Manager for Central Romana, clearly also pleased to be welcoming yet another air service to the Casa de Campo – La Romana airport.

Disembarking from the aircraft, the group of representatives of InselAir and Curaçao were joined by Andres Fernández and an increasingly enthusiastic Gustavo De Hostos, for the ribbon cutting ceremony, which ended in not only a round of applause, but also a rousing cheer!

Back inside the Casa de Campo – La Romana airport terminal, which by the way was built to resemble a sugar mill, Gustavo De Hostos, acted as the Master of Ceremonies for a brief series of speeches from Andres Fernández, Jurgen Lippinkhof, and Earl W. Balborda.

“Why La Romana? With the new highway Punta Cana is only 45 minutes away and Santo Domingo only 45 minutes drive too. There is a lot of potential here, there are 4,000 hotel rooms in the La Romana area, and if 4,000 isn’t enough there are a further 10,000 in Punta Cana – Bavaro area,” commented Jurgen Lippinkhof.

Meanwhile, expressed his pleasure at seeing Curaçao become a closer neighbor to fellow Caribbean island nations, not least because it will make his future holiday vacation to La Romana – Casa de Campo much easier, but will also benefit both nations economically. “We believe that it is very important that Curacao a better neighbor to its Caribbean neighbours. In the past it was easier to go to Holland than it was to come here in La Romana. La Romana is an excellent destination, and this new flight adds a lot of value to both Curacao and La Romana,” he said.

To end the ceremony, Andres Fernández was presented with a bottle of Blue Curaçao, a liqueur flavored with the dried peel of the laraha citrus fruit, grown on the island of Curaçao.

In addition to Curaçao now only being a short 80-minute flight away, InselAir also offers convenient connections to Bonaire and Aruba via Curaçao, meaning that not only can we expect to welcome more visitors from ever before from these Caribbean islands, but for those of us looking for a somewhere new and interesting to visit we now have more options… so what will it be for you this summer? Curaçao, Bonaire or Aruba? Return flights start at just over US$200 – so what are you waiting for!?

With the aim to entice you into flying to Curaçao, between now and the end of September, Insel Air has a fantastic introductory fare of just US$233 return between Casa de Campo – La Romana Curaçao. Meanwhile flights from Bonaire start at US$268 and from Aruba US$296.

The following collection of images were taken during the celebration of the inaugural flight Curaçao – La Romana with InselAir:

Flights arrive and depart every Monday.

Curaçao is an island in the southern Caribbean Sea, off the Venezuelan coast, that forms part of the Dutch Caribbean, a constituent country of the Kingdom of the Netherlands. It has a population of over 150,000 on an area of 444 km2 (171 sq mi) and its capital is Willemstad.

While tourism plays a major role in Curaçao’s economy, it is less reliant on tourism than other Caribbean countries. Most tourists originate from the Eastern United States, South America and the Netherlands. It currently leads the Caribbean in cruise tourism growth with 610,186 cruise passengers in 2013, a 41.4% increase over the prior year.

The island’s insular shelf has a sharp drop-off known as the “Blue Edge.” Scuba diving tourists often visit for this vista.Coral reefs for snorkeling and scuba diving can be reached without a boat. The southern coast has calm waters, as well as many small beaches, such as Jan Thiel and Cas Abou. The coastline of Curaçao features numerous bays and inlets which serve as popular mooring locations for boats.