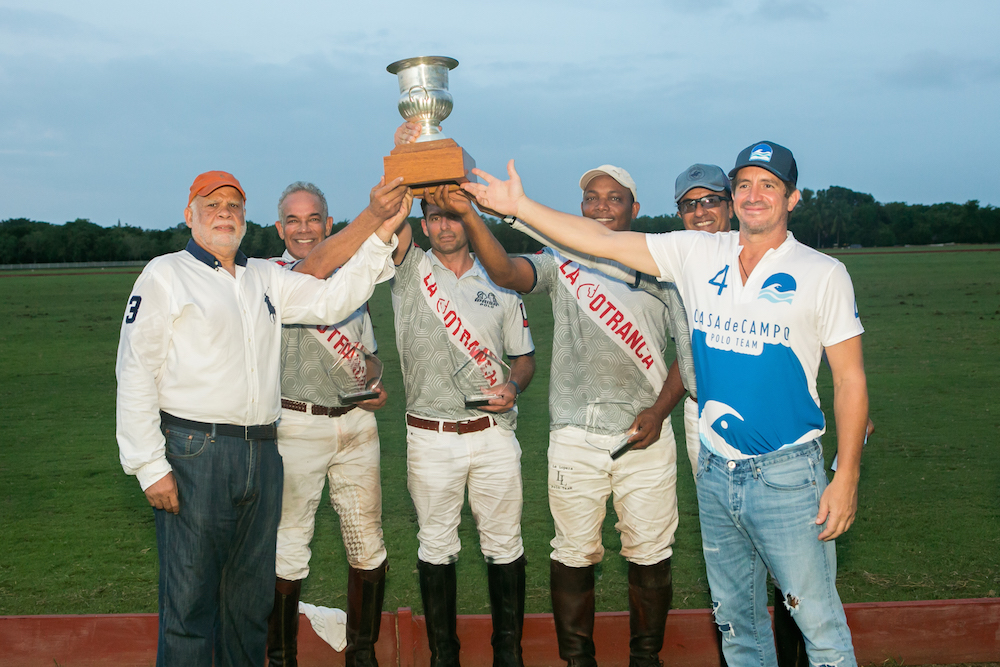 Last Saturday, July 31, Casa de Campo Resort and Villas held the second installment of the Friendship Cup dedicated to Dr. José López, a Dominican polo player of yesteryear and much loved in the country’s equestrian community.

The affection that his friends and family have for him was appreciated during the final, as they defied the conditions of the weather to see the exciting match carried out between the La Potranca and Mcdonalds-La Espada teams.

Five minutes before kick-off, the heavy rain fell and soaked Casa de Campo’s number two polo field. However, this was not an impediment for the polo players with their agile and fast horses to give their best.

The game ended from 13 to 11, with the La Potranca team winning (made up of Tony Rivera, Bijai Singh, Mario Villegas and Julian Diaz), against the Mcdonalds-La Espada team (made up of Ramón Andrés Brenes, Mauricio Bogaert, Enrique Bonetti and Eriberto Constanza).

“A final that started 4-0 due to the handicap difference and the first chukker with a penalty that made it 5-0. We must highlight the formidable work of the La Potranca team where Tony Rivera did the difficult work, with a Bijai Singh in his best moment, a Mario Villegas who delivered, and Juan Diaz, the brain of the team ”, explained Fernando Arata, director of Casa de Campo Polo.

“It was an intense match, with good horses, and despite the rain there was no danger, there was no slip,” said Arata.

It should be remembered that that same day, at 4:00 in the afternoon, the subsidiary cup was played, which was won by the Casa de Campo team made up of its captain Leo Matos, Rodolfo Paliza, Pablo Avalos, and Alex Schad.

“Polo is part of my life”

For Dr. José López, who is currently Vice President of Health at Central Romana and director of the Central Romana Medical Center, this tournament dedicated in his honor means a lot, because polo has always been part of his life.

López expressed that his greatest friends have had them through this sport and that many players who participated in the tournament have seen them born and grow.

“This homage-tournament that the Casa de Campo Polo Club and the Dominican polo players have dedicated to me, I receive it with great humility and joy, because we have always tried to ensure that there is joy in polo, camaraderie and that the sport is a symbol of the friendship between us ”, indicated López.

Currently, López does not participate in polo tournaments but ensures that he continues to ride horses.